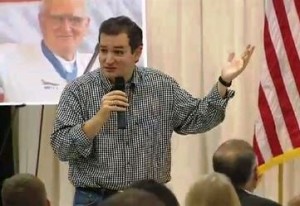 Ted Cruz spoke on Saturday at the Defenders of Freedom fundraiser in Iowa, hosted by Republican Congressman Steve King. Cruz spent a significant portion of his speech going after the Obamacare rollout and cracked a few jokes at the expense of President Obama, Joe Biden, and even some of his Republican colleagues.

Cruz said one of his daughters told him she wants to work in the Senate too but when she gets in “daddy’ll be dead by then.” He joked, I wondered if Carolina had been speaking to Republican leadership.”

At numerous points Cruz compared the current economic situation to the malaise of the late Jimmy Carter years, and drew direct contrasts between the economy under Ronald Reagan and under Obama. He said that in the Senate, “we have spent virtually zero time even talking about jobs and economic growth; it simply isn’t a priority in Harry Reid’s U.S. Senate.” Cruz also said that the “single biggest lie in politics” is the notion that Republicans are the party of the rich.

He touted the massive grassroots campaign that rose up in opposition to drone strikes, gun control, immigration, Syria, and, of course, Obamacare. He found it more than a little humorous how Democrats are now embracing the idea of delaying the health care law.

“I seem to recall––it couldn’t have been more than two weeks ago––when every newspaper, every television station, every political graybeard said ‘It is impossible that the president will ever ever ever delay the individual mandate or do anything to delay Obamacare! You guys are nuts for suggesting this!'”

He referred to his filibuster and joked, “21 hours is a long time. I mean, that’s almost as long as it takes to sign up on the Obamacare website.”

Watch part one of the video below, via NBC News: