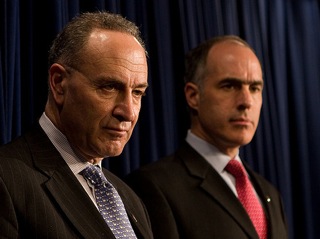 The media have been enthralled this week with the story of Eduardo Saverin, onetime Facebook founder and current millionaire/fictional Aaron Sorkin tragic figure. He gave up his American citizenship earlier in the week allegedly to avoid paying up to like $67 million in taxes (according to Sens. Chuck Schumer and Bob Casey), and now the Senators are planning to legislate the problem away, as only senators can. During a press conference this morning, Schumer and Casey unveiled the “Ex-PATRIOT Act,” specifically designed to prevent “outrages” like Saverin’s move to Singapore.

According to ABC News, the Senators propose to increase taxes on people like Saverin, as an attempt to get them to not leave the country because of high taxes:

At a news conference this morning, Sens. Schumer and Bob Casey, D-Pa., will unveil the “Ex-PATRIOT” – “Expatriation Prevention by Abolishing Tax-Related Incentives for Offshore Tenancy” – Act to respond directly to Saverin’s move, which they dub a “scheme” that would “help him duck up to $67 million in taxes.”

The senators will call Saverin’s move an “outrage” and will outline their plan to re-impose taxes on expatriates like Saverin even after they flee the United States and take up residence in a foreign country. Their proposal would also impose a mandatory 30 percent tax on the capital gains of anybody who renounces their U.S. citizenship.

The Senators also announced that the law would make it impossible for the person leaving to return to the United States, but that actually already is the law.

Congress getting involved in the hottest story of the day, albeit marginally, is, in some ways, a watershed moment for the Eduardo Saverin as Benedict Arnold of a country he wasn’t born in meme. The Saverin story is an interesting one to the media because it has all the superficially good elements of a media story: money, a famous person, patriotism, and Aaron Sorkin. Whether the famous person is particularly interesting or the questionable patriotism is a valid discussion (Saverin is Brazilian by birth) doesn’t seem to matter, and the substance that comprises this news– which is fundamentally about the most boring topic in human history: taxes– doesn’t help make it eye-catching. The story was bound for a slow death, gurgling up in the Twitter accounts of loyal Mashable readers once in a while before finally ceding news cycle time to the next media bauble, the next Golden-Voiced Homeless Man or Sully Sullenburger or William Hung. Mercifully, Saverin’s citizenship has been laid to rest in the most efficient “cool”-killing way possible: sending in Congressmen.