Seth Rogen: Some Comics Decrying PC Mob Forget They ‘Have to Be Funny’ 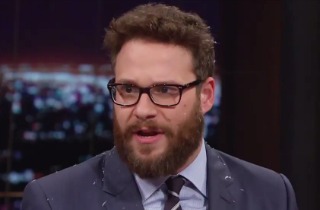 It seems like almost every week there’s a comedian who says something politically incorrect and then either apologizes for it, defends it, or leaves it as is while the internet rumbles with righteous anger. And of all the comedians who get flak for the politically incorrect stuff they say, arguably the biggest target is the man who hosted a show literally called Politically Incorrect: Bill Maher.

And on Maher’s show last night, Seth Rogen opined on the subject of political correctness weaving its way into the comedy scene and not really finding much at issue there as Maher does.

They were going off a viewer question about why comedy doesn’t talk about politics or social issues in the same way it used to. Rogen completely rejected the premise of the question, though Roland Martin pointed out there are plenty of comics who don’t dare tread in political waters because of potential backlash.

Rogen said he’s never been the brunt of any politically correct mobs, and he made a movie making fun of the rapture. Rogen then took the opportunity to take issue with something comedians do after comments that don’t go over well:

“I think some people who get labeled as comics who are like, ‘Ooh, the political correct community is condemning me,’ forget that they also have to be funny. And I think that when your shit is funny, people are much more willing to accept an idea that they themselves might find horribly offensive.:

Maher didn’t follow up on Rogen’s comment, but in the past, he himself has taken issue with politically correct social media-fueled outrage plenty of times in the past.