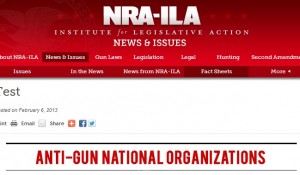 The “enemies list” got bumped off. In the glare of recent media attention, especially from MSNBC’s Lawrence O’Donnell, the National Rifle Association has taken down what critics are calling an “enemies list,” a web page devoted to organizations and individuals whom the NRA feels are inimical to their cause. After O’Donnell spent two nights detailing the absurd, and often chilling, names that comprised that list, the NRA first scrubbed the page, but put up another in a less conspicuous place. As of Thursday morning, the replacement list is missing, and an NRA-ILA staffer confirms to Mediaite that the list “has been taken down.”

In the days leading up to President Obama’s State of the Union address, the National Rifle Association appears to have tucked away its controversial enemies list in a hard-to-reach corner of its website.

The NRA posted a list of more than 500 people and organizations considered “anti-gun” on Sept. 17, 2012. In recent days, the NRA seems to have removed it after facing public scrutiny. Visitors to that page now are greeted with a “Page Not Found” error message.

But MSNBC discovered another version of the list still buried deep within the NRA network on a page labeled “Test.” The URL also suggests the page could have been created as far back as 2010. However, the time-stamp is listed as Feb. 6, 2013.

O’Donnell’s The Last Word aired a segment detailing the disparate individuals on the NRA list that night, and followed up with a tough segment Wednesday night, accusing the organization of anti-Semitism by virtue of its inclusion of many Jewish organizations on the list, including the Anti-Defamation League. On Thursday morning, the replacement page was gone. A staffer at the NRA Institute for Legislative Action confirmed that the page “has been taken down,” and that the list is not available via email, either.

A comparison of the original page and the newer page, via Google cache, shows that the change was about more than just moving the page. Originally entitled “National Organizations With Anti-Gun Policies,” in a soothing gray font, the newer list featured bold, red, all-caps lettering that read “ANTI-GUN NATIONAL ORGANIZATIONS,” wiht similar changes throughout the list’s sub-categories. The ADL is on both lists.

The National Rifle Association faced charges of anti-Semitism in 2007 over a magazine cover depicting New York City Mayor Mike Bloomberg as an octopus:

After Diane Cardwell of The Times wrote about a National Rifle Association magazine’s broadside aimed at Mayor Michael R. Bloomberg and his gun proposals, a reader raised an issue about the image on the cover (at right), showing the Jewish mayor as an octopus.

According to the sites, the image has been used in anti-Semitic propaganda, from the Nazis to the modern Arab world.

Here’s what the NRA and the ADL said at the time:

NRA spokeswoman Ashley Varner said possible parallels between the magazine cover and the historical context of the octopus were accidental.

“Any use of it as any sort of anti-Semitic symbol is inadvertent and unintentional,” Varner said.

She added that the cover caption explains why the octopus image was used. It reads: “How NYC Mayor Michael Bloomberg extends his reach and his illegal anti-gun tactics across America.”

…The Anti-Defamation League said although some may perceive the drawing as offensive, it did not believe the cartoon is inherently anti-Semitic.

“While the use of an octopus to connote anti-Semitism has been used by the Nazis and anti-Semites, and is still used today, it usually is accompanied with a very specific symbol” or other indicators that the magazine cover does not have, said ADL spokeswoman Myrna Sheinbaum.

The NRA-ILA has not yet responded to a request for an explanation of the list’s deletion.