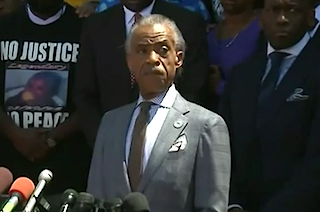 On Tuesday, MSNBC host Al Sharpton traveled to Ferguson, Missouri where he met with the family of Michael Brown, the unarmed 18-year-old who was shot and killed by police there over the weekend. During a press conference that followed, Sharpton called for justice in Brown’s killing and urged angry residents of the city not to resort to violence and rioting as they did immediately following the incident.

Sharpton was on the scene on behalf of his National Action Network group and said his organization would be helping the Brown family “pursue justice” for their son’s death even after the broader media establishment inevitably loses interest in the case. The family has already retained Benjamin Crump, who represented the family of Trayvon Martin, as a counsel.

“No one has the right to take their child’s name and drag it through the mud because you’re angry,” Sharpton told the crown that had assembled to hear him speak. “To become violent in Michael Brown’s name is to betray the gentle giant that he was.”

“Don’t be so angry that you distort the image of who his mother and father told us he was,” he added