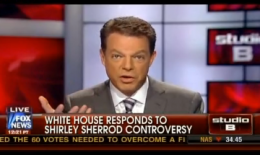 Add this to the long list of Shep Smith must-see TV moments. Fox cut out of Robert Gibbs’ stumbling Shirley Sherrod presser today and directly into Shep Smith’s Studio B. Said Shep, dead seriously: “I’m now being told we’re leaving this press conference, and since I’m being told that we’re leaving.” That sort of set the tone for what was to come. And what came was as close to an honest excoriation of Andrew Breitbart, President Barack Obama, and, at times, Fox News over their handling of the Sherrod video clip as one expects to see on cable.

Shep described Sherrod as “the woman in the center of a racially-tinged firestorm involving the Obama administration, the NAACP, the website Big Government, its founder Andrew Breitbart, and this network.” He went on to say “We now know…her current mission was to help the poor and disadvantaged of any and all races. The video, taken completely out of context, it ran all over the Internet, and television, including on this network.”

Suffice to say, it’s not every day, or any day really, that you hear a Fox host call out their own network with regards to editorial decisions. And Shep doesn’t stop there, he goes out of his way to differentiate his show from others that ran and responded to the video before the facts were out:

Clearly not guidelines either parts of Fox News or the Administration followed. And that was just his opening salvo. To guest Juan Williams he said: “The White House says it is not, but it is clearly obsessed with Glenn Beck…anyone who doubted it can now stop doubting it.” And then in appropriately aghast tones Shep takes everyone from Breitbart (“a widely discredited website”), the White House, to the NAACP to task for the manner in which they reacted to this video. “What in the world has happened to our industry and the White House…how can the White House lead and govern if what they’re worried about something that happens on a cable news channel which they’ve already said doesn’t matter.” Indeed. Watch below.