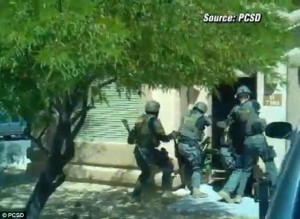 A recent report has revealed that Jose Guerna, the Iraq War Veteran killed in a Tucson, Arizona SWAT team raid did not even fire one shot before he was killed.

Guerna was accused of drug smuggling, robbery and human trafficking but despite the SWAT team’s initial reports that he fired the first shots, a more conclusive investigation has revealed that he not only had the safety on his gun but was asleep until his wife warned him that the SWAT team was storming his house.

A startling video depicts the event. It was taken from the head-cameras of one of the SWAT team members and shows a short warning siren followed by almost inaudible yells before the team breaks down the door and starts firing. The entire video is 54 seconds long, but in that time the SWAT team fires over 70 shots, 60 of which hit Mr. Guerna.

The SWAT team lawyer, Mike Storie stated that the men were just in their actions as Mr. Guerna did have a weapon and the team had no way to know that the safety was on. The team had a warrant and Storie noted that weapons and body armor were found in the house, although he declined to comment on whether the team had discovered drugs.

Guerna’s wife alleges that the actions of the team were criminal assault and her lawyer, Chris Scileppi told ABC news that although medical personnel arrived shortly after the attack, they were not allowed inside the house to treat Mr. Guerna for an hour and 14 minutes. Storie defended this by saying that the SWAT team was trying to protect medical personnel, as there was the potential that there were other armed men in the house.

Watch the video and see for yourself. Was Guerna an innocent victim or did the SWAT team do the right thing?