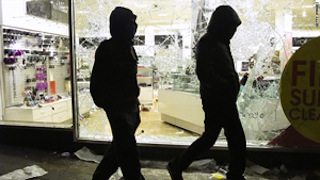 It seems that we as a society are still going through a transitional phase when it comes to mass media. It’s amazing to think how relatively recent the day was when humans first gained the ability to communicate with the entire world instantly. As the Middle Eastern protesters and Philadelphia gangs have shown, social media can inspire revolution and violence of an enormous scale almost immediately. Words have consequences like never before and, as such, the punishments for the wrong words have risen as well. In the UK, a nation raw from the ravages of last week’s riots, young people are facing huge repercussions for writing messages online that could have incited violence. Two young men are actually receiving jail time for posting about proposed riots…even though the riots never actually happened. Is this the shape of things to come?

The Guardian has a couple of fascinating articles about Jordan Blackshaw and Perry Sutcliffe-Keenan, two men in their early 20s who have each received four years in prison for things they wrote on Facebook. Both young men created pages for riots in their hometowns. Despite the fact that neither they or anyone else actually attended the “event,” they’re both now heading for jail.

Unsurprisingly, this has caused quite a bit of controversy. Are these men necessary examples or is this a justice system hastily acting out of fear?

Another British youth, a 17-year-old minor, has been sentenced with “120 hours community service, a 12-month youth rehabilitation order and observe a curfew between 7pm and 6am for three months” for writing three sentences of support for the rioters on Facebook. He has also been banned from all social media for a year. His hearing apparently included the Kafka-esque scene of him trying to prove he was joking because his message ended with the term “LOL.”

One can feel a shift in society’s treatment of young people and the Internet in recent years. For more than a decade, adults were terrified what the Internet would do to their kids. We worried that child molesters were filling the virtual corridors of every chat room, we were positive that some dumb picture from a high school part would keep our children from ever getting employed. Now though, more than ever, people are frightened not for the kids, but of them. The news headlines throughout 2011 have been screaming that scary young people can do seemingly anything with their laptops and smart phones and it all seems to be bad. “Hacktivists” are getting into government websites, plain hackers are stealing our credit card numbers, hell, even an invitation to a dance party can turn into a full scale disturbance.

It seems likely that we’re heading for the second coming of the War on Drugs.

Decades ago, as fear mounted in the nation, the government decided to take a hard line in the prosecution of drug-related crimes. Today, the debate rages whether or not that “war” could ever really be won. What’s unquestionably been lost though is nearly a generation of America’s poor. Massive percentages of men from inner-city ghettos and rural trailer parks have wound up behind bars, lives ruined because they had drugs on them. With it becoming clear that many of the looters in the UK and violent “flash mobs” in America are of low economic status, it’s easy to imagine that an errant Facebook post will be the next decade’s bag of meth.

The problem is something needs to be done. Our law enforcement officials need to stop these outbreaks as best they can. The question is, will our search for a quick fix end up having long term repercussions. Just as the words online have consequences, our choice of how to react do too.