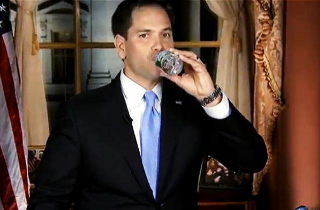 Marco Rubio delivered the GOP response to President Obama’s State of the Union last night. Did he talk about the contracting economy, rising unemployment, immigration reform, spiraling debt, and what we can do about it?

But thanks to a unique moment of having to take a (gasp) sip of water while publicly speaking for a long stretch of time, the only thing talking heads are talking about today is Rubio “watering down the Republican message.”

Should the Rubio water story been broached? Of course. But to devote entire segments to analyze the subject illustrates where media priorities are today (sizzle over steak). Sure it was worth a mention, a chuckle, a Watergate joke, but nothing more than that.

This isn’t to say this kind of focus on fluff doesn’t go both ways. How many times did conservative media rehash the President’s “57 states” line as either as an act of stupidity by the Harvard Law grad, or some kind of connection to the number of members of a relatively-obscure Islamic organization? It seems no one on either side can sympathize that very public figures are prone to misspeaking or actually needing a swig of water once in awhile.

According to a October Gallup survey, Americans’ distrust in the media hit a new high in 2012, with six in ten saying they have “little or no trust” in the mass media to report the news “fully, accurately, and fairly.” Not included in that survey is what little is left of actual journalism, and how much embrace the sensationalism model has gained in its place.

Harold Ford Jr. (D): “He looked last night as if he was running to be the head of a fraternity in college…Fraternity president.”

Joe Scarborough (R): “(Rubio) is not ready to be President of the United States…Republicans pushing him out there are making a big mistake.”

Since old, white, stuffy Mitt Romney’s defeat in November, the media has lectured us on what kind of candidate the GOP needs to produce, which actually sounds similar to a remedy for a struggling baseball team: Republicans need to get younger, more diverse, stronger up the middle.

So what happens when a respected 41-year-old Cuban-American Republican U.S. Senator is put on the national stage?

The media turns him into a punch line. And if you’re like most Americans too busy to devote hours of time to watch the State of the Union and its rebuttal, the news you got this morning portrayed Rubio as Cindy in the infamous spelling bee episode of the Brady Bunch (Cindy aces all tests in school until a red light on a camera during a televised contest freezes her beyond repair).

Only 44 months until Election Day.

The same cable anchors who lament not being taken seriously enough—all while taking our elected leaders to task for not tackling the serious issues of the day—have turned political analysis into Nancy Kerrigan vs. Tonya Harding. It’s all a baton and figure skating judging now…

Perhaps it’s because President Obama has set the performance bar as high as LeBron James is in the NBA lately or Daniel Day Lewis on screen. Most would agree that when it comes to public speaking, Obama beats Bill Clinton, John Kennedy and even Ronald Reagan in the television era. Perhaps we’ve come to expect all of our major players to reach that kind of oratory stratosphere, and when they don’t, we jump to the kind of conclusion that Mika Brzezinski came to this morning:

For all of you aspiring cable news hosts out there, be sure to add “accomplished at telepathy” to your resumes when applying for that next opening. It’s now a prerequisite…