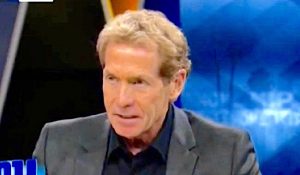 On Wednesday night, multiple documents emerged in which New York Giants kicker Josh Brown admitted to “physically, emotionally and verbally” abusing his wife, Molly Brown, over a period of years. Prior to the 2016 season, the NFL handed down a one game suspension for Brown, despite the fact that Molly alleged he’d been violent with her on more than 20 occasions. The league cited a lack of available information, including Molly’s unwillingness to cooperate with an NFL investigation, as the reason for the light punishment.

A report from Deadspin Thursday, however, said that the NFL had easy access to a court document in which excerpts of the letters were revealed in which Brown admitted to the abuse. Another report from SNY Thursday claimed that the NFL knew of and got involved in a domestic dispute between the Browns at the Pro Bowl this past January.

“Was it incompetence?” Skip Bayless asked on Friday’s edition of Undisputed. “Or was it pre-meditated incompetence, as if — need to sweep it under the carpet?

Bayless pointed the finger at NFL commissioner Roger Goodell for the league’s “pre-meditated incompetence,” and called for him to be fired.

“I thought the commissioner would — and should have — lost his job over Ray Rice,” Bayless said. “He was on the public hot seat — maybe not the owners’ hot seat. Now this happens.

“This is a ‘lose your job’ sort of incompetence, to me.”

UPDATE 2:30 p.m. ET — ESPN is reporting through multiple sources that Josh Brown is going to be placed on the commissioner’s exempt list, and is done kicking for the New York Giants.