So Much for a Smooth Transition: Trump Slams Obama Over ‘Inflammatory’ Statements, ‘Roadblocks’ 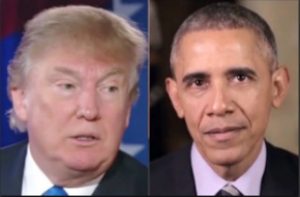 President-elect Donald Trump is still attacking President Obama on Twitter, saying that it’s his predecessor’s fault that the transition of power has taken a turn for the worse recently.

The relationship between Trump and Obama got surprisingly cordial in the first few weeks after the mogul claimed victory in the 2016 election. Even so, tensions have been boiling over lately, so Trump decided to go on the attack on Wednesday morning.

Doing my best to disregard the many inflammatory President O statements and roadblocks.Thought it was going to be a smooth transition – NOT!

Trump offered similar comments throughout this week, ever since Obama said in an interview that he could’ve beaten the mogul if the 2016 election was between the two of them. Trump first said there was “no way” Obama would’ve defeated him, and later, Trump remarked that Obama campaigned for Hillary Clinton across the country, yet it still wasn’t enough.

Afterwards, Trump turned his attention to America’s decision to not veto the United Nation’s Resolution on Israel’s settlements in disputed territories. Trump has been attacking the U.N. a lot lately, but today, he ripped the Obama Administration for treating Israel with “total disdain and disrespect.”

We cannot continue to let Israel be treated with such total disdain and disrespect. They used to have a great friend in the U.S., but…….

not anymore. The beginning of the end was the horrible Iran deal, and now this (U.N.)! Stay strong Israel, January 20th is fast approaching!

President-elect Trump, thank you for your warm friendship and your clear-cut support for Israel! ????@IvankaTrump @DonaldJTrumpJr https://t.co/lURPimG0wS