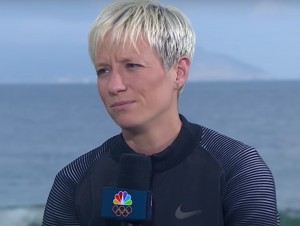 According to a report from American Soccer Now, Rapinoe said she took a knee before Sunday night’s Seattle Reign vs. Chicago Red Stars game to support 49ers quarterback Colin Kaepernick, and the issues of racial oppression that he’s protesting.

“It was a little nod to Kaepernick and everything that he’s standing for right now,” Rapinoe said. “I think it’s actually pretty disgusting the way he was treated and the way that a lot of the media has covered it and made it about something that it absolutely isn’t.”

Later, Rapinoe acknowledged her protest on Twitter. In response to a thank you tweet from Shaun King, senior justice writer for the New York Daily News, Rapinoe wrote, “It’s the least I can do. Keep the conversation going.”

It’s the least I can do. Keep the conversation going. https://t.co/qwfHcqgV6J

Speaking to former US national team star and current ESPN soccer analyst Julie Foudy, Rapinoe said that she thought the treatment of Kaepernick has been “overtly racist.”

Rapinoe to me on taking a knee for anthem: I’m disgusted w way Colin has been treated & the fans & hatred he has received in all of this.

Rapinoe: It is overtly racist. Stay in ur place black man. Just didn’t feel right to me. And quite honestly being gay, I have stood with…

Rapinoe: my hand over my heart during the national anthem & felt like I haven’t had my liberties protected, so I can absolutely sympathize..