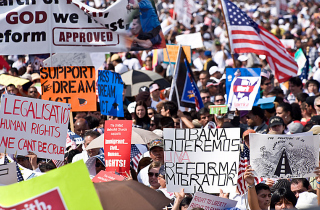 There are those who support – whether enthusiastically or reluctantly so – immigration reform on compassionate grounds or out of a desire to fix our broken system (border control; greater enforcement; changing our evaluation methods for who gets in and who doesn’t, etc.).

But let’s be blunt: political gain is the driving factor. It’s no surprise that the three Republicans most publicly discussing the issue are all 2016 contenders: Marco Rubio, Rand Paul, and Jeb Bush.

We conservatives are told – by GOP strategists and consultants – that immigration reform is the key to winning the Latino vote. Like a poor sap eager for some — any! — good news about the future, we lap it up. “Yes, yes!” we exclaim, nodding with the same wild-eyed excitement of Dr. Frankenstein watching his creation spring to life. “If only we implement immigration reform, the Latino vote is ours for the taking!”

But such is a fallacy, a silly hope with no basis in reality. As a Latina, allow me to explain why:

Latinos will resent the added competition for jobs. The current unemployment rate among Latinos wavers around a staggering 10%. Few mention this when discussing immigration reform. There is instead a knee-jerk (and unwittingly condescending) image of the Latino illegal immigrant strictly as a migrant worker or dishwasher who does the jobs others will not do. If legalized, he therefore has no impact on depriving another American of employment, as he does those jobs legal Americans – Latino or otherwise – will not do. Another image is that of she already employed as a nanny or housekeeper, and the work permit would simply enable her to come out of the shadows but affect no one else in the job market. Sure, there is much truth to this — but such is not the case across the board. Consider my friend, “Maria” – Maria is a 27-year-old here illegally from Colombia who overstayed a tourist visa. Well educated, well spoken, and fluent in English, if granted a work permit Maria plans to apply for a clerical position. Would she not be competing with “Alexis,” a 23-year-old Latina citizen born and raised in America, who has been seeking the same type of position for months? How does granting Maria a work permit help —  or hurt — Alexis? How will Alexis and other unemployed Latinos feel about granting work permits to millions, in an already extremely competitive job market? The only special interest group who wins here is big business / employers – who are now faced with even more applicants from which to choose and, thanks to the increased competition, can now offer lower wages.

Those favorably affected don’t vote – and won’t for a long time. The Latinos granted legal status, work permits, and eventual citizenship — whose gratitude would presumably fuel these ‘new GOP voters’ — won’t actually become citizens able to vote for at least a decade. So, even assuming immigration reform would result in a sizeable chunk of these grateful Latinos voting for the GOP… it would be for the 2024 election. Who knew we were planning so far ahead!

Latinos who are already citizens – and vote – don’t actually care much about immigration reform. Of course, you won’t hear that from Latino pundits or Spanish-language networks, for whom immigration reform equals TV appearances and, in the latter’s case, skyrocketing ratings (don’t forget, Spanish language television shows are viewed heavily by illegal immigrants – it’s thus no surprise that they play up immigration reform as critical.) In reality, a 2012 Gallup poll found only 12% of registered Hispanic voters cited immigration policy as their top priority. And, on a list of a half-dozen issues in a 2012 USA Today poll, second-generation Latinos rated the immigration issue dead last on their list of priorities. A Latino Decisions poll earlier this month, however, claimed 58% of Latino voters “now rate immigration reform as the most important issue they want Congress and the President to address.” Worth noting, however, is the phrasing: considering an issue a ‘top issue facing Congress’ does not necessarily equal a priority. (Also worth noting: the poll was conducted, in part, with the SEIU and the National Council of La Raza.)

The GOP won’t even get the credit. The Gang of 8’s legislation will be a bipartisan bill – so why would the GOP get the credit? And, though bipartisan, it would be signed into law by President Obama. Thus, the overarching achievement, historically and in most uninformed voters’ perception, would ultimately be credited to him – not to Rubio or any GOP senator who pushed it. While Rubio does all the legwork, it will be Obama who receives the glory.

No, Bush never received 44% of the Latino vote. In the GOP ‘autopsy’ report released this week, the section on Hispanics optimistically cites the oft-repeated claim that George W. Bush won a record-setting 44% of the Hispanic vote in 2004 – the idea being: “We did it once, we can do it again!” But the truth is ‘Dubya’ never received that high a percentage of the Hispanic vote.  No Republican ever has. In fact, many estimates place Bush’s share somewhere in the high 30’s or at an even 40% instead.

The GOP will be blamed for the enforcement mechanisms. Rubio and Rand both stress the need for a review of whether enforcement and border security is running smoothly. So, when these measures fail to live up to their expectations (inevitable), and Republican senators have to apply some brakes or tighten the border (Democrats won’t), any good will earned by the GOP goes out the window and it is once again ‘the anti-immigrant party.’

The GOP may lose some conservatives. A significant portion of registered Republicans abstained from casting a vote this past election. Why is anyone’s guess – some speculate it is because Romney was not conservative enough to galvanize the skeptics. Will legalizing 11 million be yet another blow to certain conservatives, causing them to throw their hands up in frustration and abstain, particularly those conservatives in states bearing the highest cost of immigration, such as California or Florida? Will the GOP experience a net gain in voter turnout – or a loss – from this move?

Is there a single reliable poll or study actually proving the myth that the GOP’s “harsh rhetoric” on illegal immigrants… has driven away a significant portion of the Latino vote? This week, I reached out to several Latino friends who voted for Obama, seeking to ascertain whether GOP ‘rhetoric’ or so-called ‘anti-immigration’ stances had indeed driven them away. Answer? No. Not a single one cited any particular problem with the GOP’s stance or rhetoric. In fact, they weren’t even casting a vote against the GOP (one even shrugged and noted Romney “seemed like a good guy”) – but rather casting a vote for the Democrats. It came down to… surprise, surprise… government benefits (one also mentioned unions and another a weariness of wars abroad and her concern for enlisted relatives).

The 1986 amnesty did nothing to gain the Latino vote. If immigration reform will win us the Latino vote, riddle me this: Why is it, following Reagan’s generous 1986 amnesty, the GOP’s share of the Latino vote decreased? (In the pre-amnesty 1984 election, 34% of Latinos voted Republican; in the post-amnesty 1988 election, only 30% did.) What about amnesty-hawk McCain? He only received 30%, fairing only 3 points higher than Romney (who was widely considered the most anti-immigration candidate of the primaries).

No, Latinos are not ‘natural conservatives.’ The immigration reform proponents often cite Reagan’s “Hispanics are conservative, they just don’t know it yet.” The logical conclusion that follows is: ‘If not for our pesky stance on illegal immigrants, Latinos would vote Republican.’ It’s a pleasant idea, and one worth exploring, but not necessarily backed by data. A 2012 Pew poll found that 75% of Hispanics “prefer a big government which provides more services” rather than a small government providing fewer services. (Meanwhile, only 41% of the general American public held this view.) And how did it break down generationally among Latinos? A whopping 81% of Latino immigrants held the pro-big-government stance, with the percentage only dropping to 72% amongst second-generation Latinos. So much for Reagan’s rosy view.

So, GOP, let’s not get carried away ala Dr. Frankenstein, maniacally steamrolling ahead under mistaken assumptions, faulty statistics, and crazed optimism. There are several ways to reach out and embrace the Latino community (another column, another day!) that will actually result in increasing the GOP’s share of this rapidly-growing group. But immigration reform is not the key. One may support this arguably noble endeavor for a variety of valid reasons – but thinking it will result in an influx of Latinos to the GOP? Well, that has about the same chance of success as the good doctor did.