Sorry President Trump, You Don’t Get to Honor Ryan Owens if You Won’t Take Responsibility for His Death
Opinion

Sorry President Trump, You Don’t Get to Honor Ryan Owens if You Won’t Take Responsibility for His Death 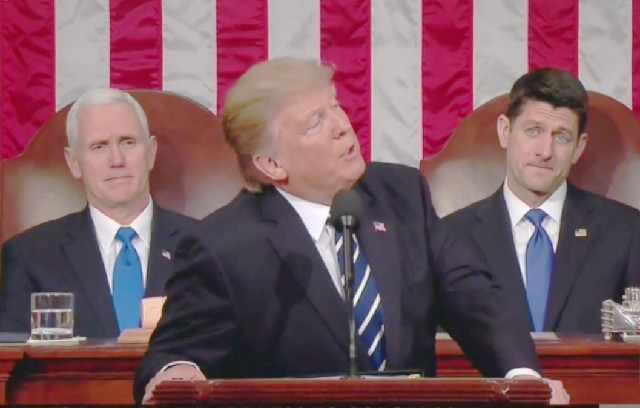 During last night’s address to a joint session of Congress, we witnessed what can only be described as an emotionally (and politically) powerful moment. With the widow of slain Navy SEAL William ‘Ryan’ Owens sitting in the gallery next to the First Daughter, the president paid tribute to her husband as the chamber gave Carryn Owens a loud and sustained standing ovation.

“Ryan died as he lived,” he told an emotional Carryn. “A warrior and a hero, battling against terrorism and securing our nation.” Trump also added that “Ryan’s legacy is etched into eternity.”

At the same time, he also slipped in that he had been told by Secretary of Defense James Mattis that “Ryan was part of a highly successful raid” that had gathered valuable intelligence. While this flies in the face of what has been reported, with senior officials saying no significant intelligence had been recovered, it does reiterate the administration’s assertion that no matter what anyone says, the raid was a success.

However, getting past that, no one can deny that that moment was absolutely perfect political theater. A president honoring a dead warrior while his widow looks up to heaven with tears in her eyes, all while a roomful of dignitaries and lawmakers stand and applaud — how can anyone not be moved? These are the kinds of moments that live on forever.

And it obviously had an immediate impact on many within political media (and even some of Trump’s harshest critics). CNN’s Van Jones called it one of the most extraordinary moments in American political history and that those critical of Trump should be a little worried. Fox News’ Chris Wallace said that Trump truly became president with that speech. The NBC News panel — featuring Tom Brokaw, Lester Holt and Nicolle Wallace — praised the speech as the most presidential Trump has ever been.

But, here’s the thing. Trump’s big presidential moment was completely undeserved. Because the man has shown he is unwilling to accept personal responsibility for the death of Ryan Owens.

See, shortly before exploiting the tears of a widow in order to gain plaudits from the pundit class, Trump was telling the hosts of Fox & Friends that the Yemen raid was something that was in place before he got into office. Pointing to his generals, Trump placed the blame for Owens’ death completely at their feet, shirking any and all culpability.

“They came to me, they explained what they wanted to do — the generals — who are very respected, my generals are the most respected that we’ve had in many decades, I believe,” he said. “And they lost Ryan.”

And that is the key quote. “They lost Ryan.” They, not we. It is their fault. They did it. It doesn’t matter if he was the one who gave approval to the mission. It is on them.

Mind you, this was an answer to a question about the father of Ryan Owens, Bill Owens, and his criticism of both Trump and the mission, which he has called “stupid” and demanded an investigation of. Bill Owens also refused to meet with the president and shake his hand when he came to Dover Air Force Base to receive Ryan’s remains with the family. Yet, now, Trump is reaping the political rewards of Bill’s son’s death and the genuine emotional reaction of Carryn Owens, all while Bill Owens demands more from the president.

And this is where the whole thing should rub you the wrong way deep down inside. A man who is easily willing to slough off one of the true burdens of being Commander in Chief — taking personal responsibility for those who die in service — is just as easily willing to embrace the praise and commendation for paying tribute to a fallen warrior.

You can’t have it both ways, Mr. President. Each and every death of a servicemember while you are in office is on your hands. Each and every one. You don’t just get to be Comforter in Chief while passing the buck on the rest of it.