State of the Union: The President’s Issues With Accounting And Accountability

State of the Union: The President’s Issues With Accounting And Accountability 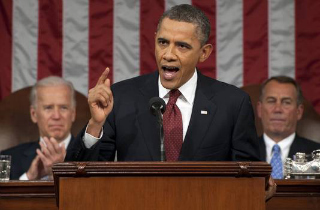 President Obama’s State of the Union address continued a theme aptly described by FNC’s Charles Krauthammer as an effort to “neuter” House Republicans. Billed as a speech that would be aggressive with little outreach to political opponents, it wasn’t as vitriolic as hyped, but wasn’t exactly a rendition of We Are the World, either.

Some on the right say the 44th President has no economic acumen…can’t handle the complexities of math. But he is politically astute enough to know that 14 + 2014 = 0.

The 14 stands for the approval rating for Congress, controlled by, of course, Republicans…

2014 is when midterm elections will be held.

Zero is the amount of power the President hopes the GOP owns in the House when said midterms are over, thereby freeing him to complete his agenda (as opposed to drifting into dreaded lame-duck territory).

Lest anyone believe Mr. Obama places the economy at the top of his list of priorities, at least according to Fox’s Brit Hume. Here’s his pre-speech perspective via The O’Reilly Factor: “This president is not really very interested in or by the economy. He doesn’t really fully understand it. I think that he is much more preoccupied with quality of opportunity — or at least or even equality of income and with social justice than he with the growth of the economy. And if the economy is bumping along at 1 or 2 percent growth, that may be good enough for him.”

If that’s the case, even that meek objective of 1-2 percent growth currently isn’t being met…though you’d never know it from tonight’s coverage of the SOTU: The term “contraction” as it relates to GDP wasn’t even broached in the speech, and was subsequently uttered on MSNBC’s postgame coverage as often as the name “Keith Olbermann” (See: not once). In case you missed it due to limited coverage, the U.S. economy shrank last quarter by -0.1 percent. As a result, more Americans see our economy getting worse, not better (Gallup).

The last time the country faced a contraction for the first time in several years (August 2008), then-candidate Obama characterized the news as an “economic disaster”. Tonight, the concern over the same fiscal state was conversely optimistic (“We have cleared away the rubble”)…as blame shifted to the usual suspects across the aisle. And the sound bite that seems to be stuck in a continuous loop was repeated again by the guest of honor, as he once again called on Congress to provide even more tax revenue…all while somehow trying to convince the American people that our deficit is dramatically decreasing, not increasing.

Note: The deficit decrease Mr. Obama referred to is refuted by Factcheck.org. “Cuts” mentioned in the speech include more than $1 trillion in spending cuts that have yet to materialize, and $500 billion in forecasted reduction of interest, not spending cuts.

But when it comes to raising taxes, Republicans say been there, done that, after already agreeing to new revenues during the fiscal cliff negotiations. In return, the President and his party offered nothing in terms of entitlement reform or spending cuts, all while getting most of what they wanted: Tax increases on most Americans…77 percent to be exact, primarily after not reversing an expiration of a payroll tax cut and raising taxes on the wealthy. It was the same tune at the State of the Union, except Republicans are standing firm this time around in demanding some form of reciprocity for the President.

The contracting economy is now one the President inherited from himself. And with George W. Bush finally too far away in the rearview mirror to lay guilt on, Mr. Obama has shifted the blame to a wounded GOP Congress.

And who can blame the President for employing the same blame game strategy?

It worked in November.

As the old saying goes, if it ain’t broke…

Unlike wedge issues like gun control, gay rights and climate change, however, economic indicators like a contracting GDP leave little for interpretation or ambiguity…

And if the economy continues to be as listless as it’s been for the past four years, the American people—at least those with the ability to think objectively and free of the kind of partisanship that permeates opinion journalism and message boards—may ultimately refer to a quote from the late British journalist Russell Ewing:

“A boss creates fear, a leader confidence. A boss fixes blame, a leader corrects mistakes. A boss knows all, a leader asks questions.”

Is the President a boss or a leader?

If the 2013 State of the Union address was any indication, the former appears to be winning.