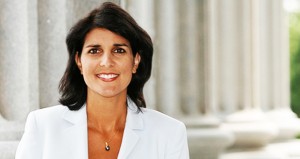 Republican South Carolina Governor Nikki Haley was plagued before by allegations of an extramarital affair with Will Folks, the founding editor of the conservative blog FITSNews and now he’s back again. Only this time he plans on spilling his juicy accusations in a new book, an excerpt of which has now been revealed.

The alleged tempestuous story, as described by Folks:

We never took our clothes off that first night, but the physical relationship between us progressed much faster than I expected. . . . I asked her why she let me kiss her earlier that night and she said she didn’t know – a theme that would evolve and expand over the next few months as our affair blossomed.

Folks goes on to claim their early encounters were similar to “eighth-grade make out sessions” and elaborates even further with more embarrassingly kinky details. The last time such titillating rumors like this swirled about a sitting governor, Eliot Spitzer found himself resigning (although things seemed to turn out fine in the end). Given that Haley previously promised she too would resign if the claims about an affair were proven, after Folks’ book is published might we soon be calling CNN‘s new 8pm show Haley/Spitzer?