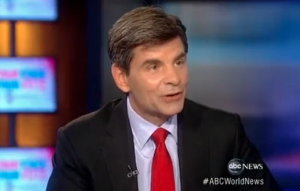 As a conservative who has devoted much of my career to exposing examples of “Media Malpractice” in an ever-changing news media landscape, the issue of liberal bias in the news has, in my view, long been proven to the point of moral certainty. The topic is actually not even that interesting to me anymore because it is just so obvious that the vast majority of all major media is way left-of-center politically.

However, the controversy over ABC’s George Stephanopoulos having failed to disclose his hefty recent donations of at least $75,000 to the Clinton Foundation piques my curiosity for a couple of different reasons. Mostly because of the remarkable ideological divide the story exposes as kind of a Rorschach test for conservatives and liberals.

For most conservatives, it is obvious what’s really going on here. George Stephanopoulos, a former top political aide to Bill Clinton, is so in the tank for the Clintons that he is literally paying them money. He is even doing so through a foundation which has become so controversial that the “news anchor” was forced to defend it in a prominent interview he did with the author of a book on the subject (who is now asking for a “redo” of that interview).

In fact, just the idea that Stephanopoulos is in his position is galling to many conservatives. They believe that even if a counterpart like Karl Rove had Stephanopoulos’ amazing hair, there is no chance Rove would ever be a daily “news” person on a major network, as opposed to an occasional commentator on a “conservative” cable channel. The idea of Rove hosting presidential primary debates for the Democratic Party would be as likely as Bernie Sanders defeating Hillary Clinton for that party’s nomination.

To conservatives, this double standard would be obvious and insidious even without a potential Clinton vs. Bush presidential matchup in the works. The Stephanopoulos donation to the Clinton Foundation and his lack of disclosure of it is simply the smoking gun of the dramatic liberal bias which pervades the mainstream news media.

However, my sense is that the perception of this episode on the political left is very different. Much like how Stephanopoulos masterfully (or arrogantly, as conservatives would say) spun his apology on Friday, most liberals likely see this as nothing more than an overzealous partisan attack on someone who was simply doing good for charity.

By portraying the Clinton Foundation as simply a charity (as opposed to a political entity used to enrich the Clintons’ power, as it is accused of being), he was able to plausibly claim that his donations were to help AIDS and poverty. The fact that, based on the foundation’s own records, very little of his $75,000 actually ever went to “charity” is irrelevant. In the liberal world, it is all about intentions and not the actual results.

I am quite sure most liberals think that Stephanopoulos did absolutely nothing wrong and find it ludicrous that he would be castigated for having been so generous to charity while simply “forgetting” to tell us how awesome he is (surely out of humility). They also certainly question how it would be a conflict of interest for Stephanopoulos to have paid the “charity” rather than, say, having accepted some sort of gift from the foundation. After all, wouldn’t the donation cause the Clintons to “owe” him rather than vice versa?

My personal view is slightly different than the either of these political polar opposites. Similar to many conservatives, I think it is absurd that, given his political background, Stephanopoulos is in a position to be perceived as a “news” person on a major “news” program. I also think it’s particularly ridiculous for him to ever host any debate coverage for either party, especially involving a Clinton. There is no doubt in my mind that if he wasn’t a liberal he could never get away with any of this, and his foundation donation would be a career-killer as a “newscaster.”

However, I don’t believe that this donation was part of some “quid pro quo” for favorable Clinton coverage or access (like that was needed!) or that there was some sort of huge conspiracy to conceal it from the public. Instead, in a weird way, the more likely explanations for why this happened are actually much less dramatic, though perhaps even more troubling.

I don’t think it ever even occurred to Stephanopoulos that this would be a bad idea, or that it really needed to be dramatically disclosed. I believe that one of the real reasons the inside-the-beltway media bias is so pervasive that everyone there is living in the same bubble. To them, giving money to the Clinton Foundation is an act that could not possibly be questioned and is not seen as even remotely political. In fact, many of the biggest media names are members of the Clinton Global Initiative.

Also, depressingly, the notion of “conflicts of interests” being worthy of being routinely disclosed has faded away in the minds of modern media. As the potential conflicts have grown so plentiful in this era of rampant media cross-pollination, it has become exceedingly clear that the public just doesn’t care about them.

Why is it a surprise that he wouldn’t think it important to disclose that he had given money to a foundation he was effectively defending or promoting? That is just a normal day.

It has often been said of Washington, the real scandal isn’t what is illegal, it’s what’s legal. When it comes to the modern news media the same concept applies in spades and this story is further proof of that sad reality.

>> John Ziegler is a documentary filmmaker and a nationally-syndicated radio talk show host. You can follow him on Twitter at @ZigManFreud. Ziegler’s first documentary film dealt with ABC’s handling of the mini-series “The Path to 9/11,” which he says was “aggressively attacked by the Clintons.”