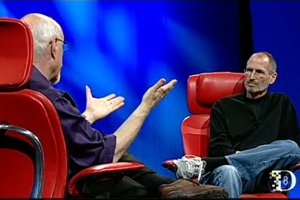 The comment came during a Q&A after he spoke at the All Things Digital technology conference yesterday, where his responses to technological competitors were much tamer than those to the new media. Regarding Google’s efforts to “compete with us,” Jobs asserted that his company had no interest in competing with Google in the realm of search engines, and as for Adobe, he stated that he had more faith in the future HTML 5 technology than in Flash. His comments on AT&T, which has exclusive rights to iPhone service, were also positive despite some complaints that the network’s service was not up to par.

When asked about the iPad, however, and the possibility that the new technology would help the increasingly frail print media business, his tone changed, giving his full support to newspapers and magazines and coming out against the less regulated new media. From the Wall Street Journal:

Asked about whether the iPad will be a savior for content creators, Mr. Jobs said: “I don’t want to see us descend into a nation of bloggers…I think we need editorial oversight now more than ever. Anything we can do to help newspapers find new ways of expression that will help them get paid, I am all for.”

It seems a bit strange to see the head of one of the most innovative technology corporations turn against a fair number of the people that make the internet worth following– after all, some may argue (and they’d make a good point) that the entire point of the Internet is to create a world where journalism is not the art of an elite class, but the work of anyone with the foresight to record events as they happen around them. Without bloggers (and tweeters, at this point in history), accurately reporting news would be more difficult based on the lower number of facts to sift through alone.

Others will argue– and there is a good point to make here, too– that Jobs’ nightmare scenario of internet personalities running amok reporting things without the mainstream media’s blessing is already here, and his attempts to revive companies that Apple’s technology had a part in taking down may be futile. Either way, one increasingly gets the sense that human consumption on the internet did not turn out the way Jobs seems to have intended it.