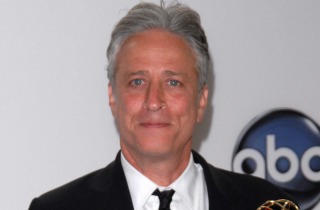 Jon Stewart has been giving interviews all over the place to promote his new movie Rosewater, but of course, he’s also getting to talk about some other things. And in a Rolling Stone interview out today, Stewart opens up about perhaps his favorite punching bag: Fox News.

That part of the interview kicked off when the subject of Bill O’Reilly was brought up. Stewart and O’Reilly have regular sparring matches on both of their shows, their most recent one on white privilege.

Stewart jokes that it’s just “sexual tension” between them before seriously acknowledging that O’Reilly is good at articulating his points, even if he is wrapped up in dogma and a sense of “grand nostalgia that a certain type of populist has for the country that used to exist in this magical state.”

That was probably the nicest thing Stewart had to say about anyone on Fox. He argued that the cable network has helped mainstream a certain strain of conservative paranoia:

I think that Roger Ailers’ [sic] great gift was mainstreaming that nativist, paranoid streak in American politics and putting it on television in a much prettier, shinier box. What they did was change the inflection point. AM talk radio is, “We are being robbed by communists and progressives that are destroying this country. They are a cancer and treasonous!” Fox News does it like, [sweet, cheery voice] “Are we being run by communists? Is it treason what they’re doing? Let’s have the discussion.”

Stewart contrasted O’Reilly (“almost a Kennedy Democrat” compared to the rest of the network) with Sean Hannity, whom Stewart described as “probably the most loathsome dude over there.” “That’s just pure cynicism, and it’s horrible,” Stewart said. “Everything is presented in as devious a manner as it could be possibly be presented.”

He went on to argue that Fox News is very good at creating a persecution complex for the right, that “they are the true victims of all these other groups claiming to be victims.” Stewart did, however, dismiss the idea this is about President Obama‘s race, because, as he pointed out, “people would go on the floor of congress and accuse Clinton of having peopled killed and raped.”