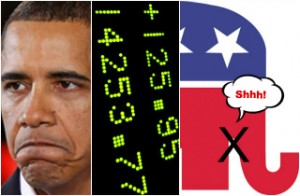 A tale of two parties:

On the Democratic side, President Obama portrays himself as a savior of the middle class. His primary function, as successfully articulated in the campaign that earned him a second term, is to shelter working folks from Republicans, who, of course, only exist to protect their rich buddies currently waterskiing behind a yacht near you.

Mantra: Tax the top 1% even more, make them pay their fair share, level the playing field, and give everyone else a break.

Most Republicans portray themselves as saviors of the economy and capitalism. Their primary function is to prevent the President/Democrats from spending us into oblivion (some call it Greece) as evidenced by our $17 trillion debt…about $7 trillion of which was spent under the current administration.

Mantra: Stop the bleeding, balance the budget, allow more folks to keep their hard-earned money, and party like its 1986 again.

In a related story, Friday’s Dow closed down slightly at a still-eye-popping 14,514, ending its longest winning streak in nearly 17 years. This kind of rally, these record-highs, are usually great news for the party in power. But for a guy who enjoys spiking the football on any issue resembling success, Mr. Obama rarely broaches the subject.

Republicans are mum as well. After all, any good economic news (in their view) can’t be good for the party going into the midterm election season (which starts in seven minutes). That’s not saying—as some will below—that the GOP is rooting for Americans to suffer…it just means you won’t really hear any conservatives in government or its brand of media bring it up.

So why isn’t the President taking credit for the market’s awesome performance?

Here’s one theory: As mentioned earlier, the President says he’s a champion for Main Street, not Wall Street. If he touts the Dow busting through another ceiling, he’ll only be contradicting the Occupy Wall Street crowd he subtlety aligned with during the campaign (when he was drawing a contrast with a very rich Republican nominee). The way Mr. Obama’s surrogates in the media laid out the argument when courting votes, Wall Street is a place where corporate raiders like Gordon Gekko and Mitt Romney get rich on the backs of the middle class. To suddenly say a big bull market is a good thing for the country as a whole would somehow be seen as hypocritical, the improving 401k argument notwithstanding.

Another factor in play here is an important one: The actions of the Federal Reserve System—arguably more important than any of the three branches of government—as it relates to monetary policy.

At the moment, the Fed is heavily engaged in something called quantitative easing, which in its simplest form is another way of saying, “printing more money”. And lots of it. This money is used to purchase bonds, which has resulted in the record-low interest rates we’re seeing. Ultimately, the low rates embolden people to take more risks (See: invest in stocks for the higher yields that exist there).

Overall, the Fed spends $85 billion each month buying Treasury bonds and mortgage-backed securities. For those keeping score at home, that is the same sum as the entire sequester for fiscal 2013.

So what does it all mean?

It means this stock market surge is not based on a healthy, growing economy (0.1 GDP growth last quarter; 4.0 GDP growth is considered solid), but largely by one injected with green steroids (fresh cash) and supported by sturdy corporate profits.

But don’t take my word for it. According to progressive economist Paul Krugman, this combination of quantitative easing and strong balance sheets doesn’t mean Main Street is feeling the love:

“I wish I could say that (the market rise) is all good news, but it isn’t. Those low interest rates are the sign of an economy that is nowhere near to a full recovery from the financial crisis of 2008, while the high level of stock prices shouldn’t be cause for celebration; it is, in large part, a reflection of the growing disconnect between productivity and wages.”

In other words, corporations doing better doesn’t necessarily mean its employees are also (consumer incomes are at a 20-year low, for example). Hence why President Obama didn’t mention the market’s performance even once during his most recent interview with George Stephanopoulos last week, a conversation dominated by the economy. Creating more millionaires is soooo Republican in the President’s eyes, but that’s exactly what’s going on, and that’s exactly why he’s ain’t talking.

And when the President wants to avoid a subject, so do (for the most part) his allies in the media. A booming stock market, particularly one breaking records that had existed for nearly two decades, should be a lead story on, say, MSNBC. But all we hear about is how horrible Paul Ryan’s budget is, or all about the legion of doom at CPAC, then we ever do about what’s unfolding on Wall Street.

As for conservative media, it’s the same deal. For Sean Hannity or The Five to lead their programs talking about a historic rally would appear too favorable to the President’s economic record amidst the gloom and doom normally hammered home on a daily basis.

With every news story outside of the weather, good or bad, the media needs to attribute credit somewhere…

But in the curious case of the big party on Wall Street, neither political party wants any part of the narrative.