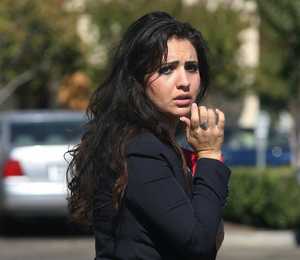 In 2005, Cynthia Moreno, a 21 year old college student, posted an angry essay on Myspace about how much she hated her hometown of Coalinga, California. The essay, meant only for friends, somehow caught the attention of Roger Campbell, the local high school principal, who then sent it to the editor of the local paper. The paper then published it (!) which led to Moreno and her family receiving so much hostility and threats that they were forced to move. Someone even shot their dog! As creepy and disgusting as that all is, if Moreno’s lawsuit against Campbell is successful, it may set a dangerous precedent for journalism.

From the Fresno Bee:

“The fact that Moreno’s case has gotten this far is of concern to [Peter] Scheer, the First Amendment advocate. He said the laws are clear that newspapers have the right to publish accurate information that’s of public interest.

‘The courts in this case haven’t done a good job of making the law clear,’ he said.
Jeffrey D. Neuburger, an adjunct professor at Fordham University School of Law in New York City, said the Moreno lawsuit is ‘a directional case’ because it could shape future litigation if upheld on appeal.

‘People are interested in seeing how courts handle cyberspace postings in the future,’ he said.

Scheer said Moreno exercised her right to express herself and now wants to prohibit others from doing the same.
He said if she was bullied and her family was threatened, she should go after the tormentors — not the source who provided accurate information to a newspaper.

If she prevails, Scheer said, ‘the public will be greatly harmed, because the flow of information about public interest will be cut off.'”

It’s hard not to feel a little bad for Moreno. Sure, she was clearly insecure and spiteful and, yes, we all need to know that you have to be ready to face the consequences for things we post on the internet, but the whole thing is just so strange. While it seems to be entirely in the newspaper’s First Amendment rights to print the essay, you have to wonder just how thin skinned Campbell and the people of this town are. It doesn’t matter if you’re town’s Mayberry mixed with Disney World, there will always be young people complaining about being “stuck there.” That’s just the way it is.

While my brain knows that Moreno needs to lose her case, my heart goes out to her. I relate to her. Not because I’ve ever done anything like what she did (I love the town I grew up in) but because, if I ever lived some place so boring that a random girl’s MySpace rant was worth placement in the local paper, I’d write nasty stuff about everyone too.

Read more about this story as well as parts of the original essay here.

(Via Poynter. Photo via)