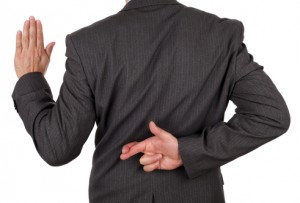 A lie can get halfway around the world before the truth can put its boots on, but should the government give the truth boots a head start? The Supreme Court is taking on that very issue in the upcoming months: whether the government has a right to police “false speech” in political advertising, specifically concerning the case of an anti-abortion group that wanted to put up a billboard going after an Ohio Democrat’s abortion voting record.

Back in 2010, Susan B. Anthony List wanted to run a billboard targeting Steve Driehaus for his abortion record, with the proposed message “Shame on Steve Driehaus! Driehaus voted FOR taxpayer-funded abortion.” Driehaus complained, and the billboard was not put up.

There’s been a fierce legal battle back and forth for years about this, and finally the Supreme Court is taking it up. Now, Susan B. Anthony List insists that the ad is not false, but the case they took to the Supreme Court is based on the premise that “false” political speech should be criminalized.

Today the Supreme Court of the United States announced it will consider the Susan B. Anthony List (SBA List) petition involving a First Amendment challenge to Ohio’s “false statement” law, which criminalizes “false” political speech and empowers a state agency to determine what constitutes true and false political speech…

“We are thrilled at the opportunity to have our arguments heard at the Supreme Court and hope that not only will SBA List’s First Amendment rights be affirmed, but those of all Americans,” said Marjorie Dannenfelser, President of SBA List. “The Ohio Election Commission statute demonstrates complete disregard for the Constitutional right of citizens to criticize their elected officials.”

Susan B. Anthony List touts support from the ACLU which has, since this case began in 2010, taken the position that the law in question essentially makes the government the arbiter of deciding what constitutes truth in political advertising, which they say would create a dangerous precedent.