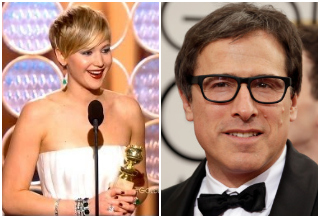 During her acceptance speech for Best Supporting Actress at Sunday night’s Golden Globe Awards, Jennifer Lawrence thanked her American Hustle (and Silver Linings Playbook) director David O. Russell for making her “career what it is.” But there is one other major franchise that defines Lawrence’s career: The Hunger Games. On Friday, Russell compared her contract with that series to “slavery.”

Speaking to the New York Daily News at the Australian Academy’s AACTA Awards in Los Angeles, Russell blamed The Hunger Games for exhausting Lawrence. “I personally think they should give her a bit of breathing room over there because they’re printing money,” he said. “I’ll tell you what it is about that girl — talk about 12 years of slavery, that’s what the franchise is.”

He immediately admitted, “I’m going to get in so much trouble for saying that.”

Russell’s comments would be fairly outrageous in isolation, but are heightened even more because his film American Hustle is expected to go head-to-head with Steve McQueen’s 12 Years a Slave in this year’s Oscar race for Best Picture. The films tied for the most nominations at the Globes and each took their respective top prizes for Comedy/Musical and Drama, respectively.

Since the Oscars does not differentiate between genres like the Golden Globes, only one film can emerge victorious in the Best Picture category. Nomination ballots have already been submitted, but what will Academy voters think of Russell’s unfortunate analogy?

“Clearly, I used a stupid analogy in a poor attempt at humor. I realized it the minute I said it and I’m truly sorry.”