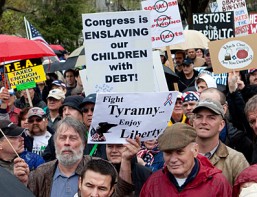 Based on the amount of attention the group is getting these days you’d be forgiven for assuming that Tea Partiers hold the secret to the universe. The NYT and CBS News have just released the results — in a splashy A-1 article in the Times, no less — of a huge, comprehensive poll they’ve jointly conducted. While the results mostly jibe with much of what we’ve recently been hearing about the movement, namely that it’s more mainstream than the media has previously portrayed it (18% of the country identifies with the party), some aspects may surprise.

Most surprising perhaps is that Tea Partiers tend to be better educated and wealthier. Yes. Perhaps not the conclusion you would draw based on much of coverage, but according to the poll “Tea Party supporters are wealthier and more well-educated than the general public, and are no more or less afraid of falling into a lower socioeconomic class.” So there’s that.

Perhaps less surprising is the fact that the party is primarily white — only one percent is black, 89 percent are white — and they are mostly male. Also, they are not fans of the president, though they have “favorable impressions of Sarah Palin, Glenn Beck and George W. Bush, but not Ron Paul or John McCain.” Also not shocking: 63% say they get the “majority of their political and current events news on television from the Fox News Channel (that’s compared to 23 percent of Americans overall).

And here’s the part of the poll that will likely make it to the cablers: 24% of these wealthy, educated, white Tea Partiers say “it is sometimes justified to take violent action against the government.” This in comparison to 16 percent of Americans overall.

And here’s the part that will likely make it to The Daily Show and SNL: 30% of Tea Party supporters are birthers; another 29 % are unsure where Obama was born. This compares to the 20% percent of Americans overall believe the president was not born in the United States. Emphasis mine. Honestly.

You can read the full results here.