Tea Party Sen. Mike Lee Suggests The Government Shut Down May Have All Been Planned By ‘Malicious’ Obama 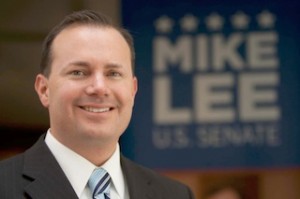 In case you were worried that there would soon be a dearth of conspiratorial notions floating around politics, I bring you Mike Lee, Junior Senator from Utah and co-founder of the Senate’s Tea Party Caucus. Lee took to the floor today and suggested that the government shut down may have been an evil plan that President Obama has been orchestrating for the past year. Five o’clock hour, here we come!

The Hill has the quotes:

“’Why was it that a few months ago … when the president had both Houses under the control of his party — why did he opt not to pass a budget for fiscal year 2011?’ asked Lee, who helped found the Senate’s Tea Party Caucus earlier this year.

‘It was either irresponsible on one hand or deliberate and malicious on the other with intention to bring about a sequence of events that would culminate inevitably in a government shutdown,’ said Lee.”

Now, I’ve watched enough Glenn Beck to know that Lee is right in asking the big question “Why?” Why has Obama threatened to veto the stopgap measure. Is it because he wants the government to shut down? Well, maybe. Or maybe it’s just because the Republican measure is also stuffed with a ton of spending cuts that go directly against what the Democrats want.

Here’s another good question. Why woud a freshmen Senator accuse the President of the United States of organizing a sinister conspiracy? I mean, doesn’t he know that these comments will be big news and that his name will probably appear in headlines all over the place and…