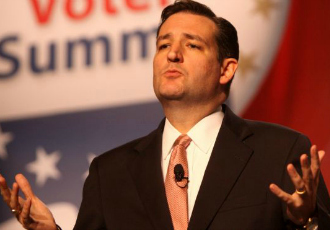 Last Thursday evening at a Republican primary candidate forum for the open U.S. Senate seat in Texas, Tea Party-supported candidate Ted Cruz took the chance to point out what he believes is “an enormous problem” facing Americans today: the creeping advancement of Sharia law in United States courts.

During a Q&A segment with attendees, Cruz advocated against a law that prohibits tax-exempt churches from endorsing candidates from the pulpit. When an attendee asked him whether he viewed “Sharia law” as a problem within the United States, Cruz followed in the footsteps of fellow Republicans Herman Cain and Rick Santorum and declared that “Sharia law is an enormous problem.”

I’m going to have to agree with New Jersey’s Republican Governor Chris Christie on this one: This Sharia law business is crap.

The “Sharia law threat” is not enormous. It’s not even a real threat. Islamic law has yet to “subvert” American courts, and the cases which have considered Sharia law typically deal with contracts where the parties agreed to be bound by Sharia law. This is a typical religious consideration that has been made for all religions, including Orthodox Judaism, Catholicism, and Islam.

The fact is that Muslims make up a tiny percentage of the American population and, oh yeah, government establishment of religion is prohibited by the Constitution. As Reason Magazine’s Cathy Young puts it: “a Shariah takeover in America is about as likely as a zombie apocalypse.”

Yet people like Cruz insist there exists a legitimate threat of “creeping Shariah,” citing particular cases of religious accommodation being used in the courts. But these cases are often misinterpreted by anti-Islam polemicists who view any accommodations for Muslims as a court subversion and an attempt by “radical Islamists” to bring their public floggings, stonings, and beheadings to America. Even though all religions get certain accommodations based on religious values — so long as they don’t violate personal liberties or individual rights — the Muslim-requested ones are especially egregious to people like Cruz because of their fear of Muslims.

What’s often lost on the people who annoyingly regurgitate the anti-Islam talk points is the remarkable success story that is the American Muslim. Unlike much of Western Europe, we don’t have Muslim ghettos, violent separatist movements, and frequent rioting. Instead we have a Muslim population that largely embraces modernity, are better educated, and see a higher income than non-Muslim Americans. According to a 2007 Pew poll, American Muslims seem to be doing just fine in terms of assimilation: just 5% of Muslim-Americans express any level of support for Al Qaeda, and a strong majority condemns suicide attacks for any reason (80%+) and has a generally positive image of America.

Time to worry about something else, Cruz, et al. Perhaps the economy is a good place to start.