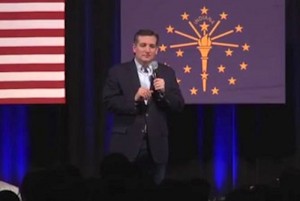 Republican presidential frontrunner Donald Trump has taken flak from the media over a great many things, but none more prominently than his incitement of violence against protesters and hecklers at his rallies. One thing that Trump has never done, as far as I know, is tell a crowd at one of his rallies to hit a kid. That’s a line that Trump rival Ted Cruz is unafraid to cross.

At a rally in LaPorte, Indiana over the weekend, Senator Cruz was telling the crowd about his tax plan on a postcard when a young boy, reportedly around ten years old, began shouting that he didn’t care about what Cruz had to say. When Cruz responded by saying “All right, apparently there’s a young man who’s having some problems,” the kid, with pinpoint comic timing, shouted “Yeah, you suck!”

It was then that Cruz ironically compared the kid to Donald Trump, who’s never told anyone to hit a kid, and instructed the crowd that the appropriate response to the child was to strike him physically:

You know, in my household, when a child behaves that way, they get a spanking.

In fairness to the kid, though, spending your Sunday night in Indiana listening to Ted Cruz drone on about taxes will make anybody cranky. And who knows, maybe the kid had a legitimate beef. Maybe he’s afraid of losing his health insurance, or that he’ll never get to grow up and follow little girls into bathrooms or some such. You don’t know.

Cruz has previously talked about spanking his own kids, and about spanking Hillary Clinton, and the topic has become a weird theme with Republicans this election season, so maybe this ought to become part of the platform.