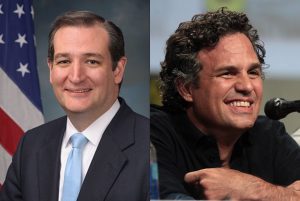 In the span of 140 characters, well known cinephile and occasional elected official Ted Cruz of Texas managed to tip his hat to actor Mark Ruffalo and then pull the rug out from underneath him.

The move came in a Tweet that was posted overnight, where Cruz — who has earned himself a fair bit of headlines by doing pretty good impressions of Billy Crystal — first called Ruffalo “a good actor.” The Texas Senator and former Republican candidate for President even shouted out Ruffalo’s turn in the 2013 thriller Now You See Me.

.@MarkRuffalo-a good actor (Now You See Me was great) whose arrogant condescending video will add votes to GOP. Thx! https://t.co/qs1TkUCNEV

…and just as quickly, Cruz turns the compliment on its head, writing, “…whose arrogant condescending video will add votes to the GOP.”

Cruz’s commentary linked to a Tweet from the actor identifying the recent news that the Texas Senator offered his help in Donald Trump‘s debate prep. Ruffalo, who passionately endorsed and aggressively campaigned for Bernie Sanders during the Democratic primary, called the Cruz-Trump team, “[t]he princes of chaos.”

The “video” that Cruz is likely referencing comes from a “Save the Day” comedy bit that features a dizzying array of A-List (mostly) celebrities released last week largely in opposition to the Trump candidacy. With the help of Robert Downey Jr., Leslie Odom Jr., Keegan-Michael Key, Julianne Moore, and even West Wing alums Bradley Whitford and Martin Sheen, Ruffalo sarcastically urges people to vote, essentially, for anyone but Trump:

Doesn’t look like Cruz is likely to bust out any impressions from this video any time soon.
—