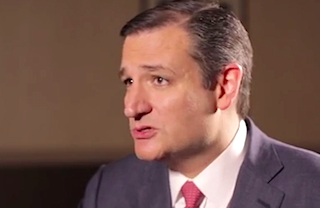 On Tuesday, the media exploded over the news that Sen. Ted Cruz (R-TX) would be signing up for health coverage under the Affordable Care Act, a law he has spent much of his time in office trying to destroy, now that his wife has taken a leave of absence from her job at Goldman Sachs to join his presidential campaign. In a new interview with The Heritage Foundation’s Daily Signal, Cruz accused the media of playing “gotcha games” with his decision and did his best to play down the inherent irony of the situation.

“The mainstream media loves to play gotcha games,” Cruz said, explaining that his family is “going to do what anyone else would do” if they lost their existing health insurance, which is to go onto the Obamacare exchanges and purchase coverage through his job in the U.S. Senate.

“And so suddenly, all the media goes, ‘Ah ha ha ha, gotcha!'” he continued. “Because Cruz is now signing up for Obamacare. Listen, I have zero intention of taking any government subsidy or Obama subsidy. Rather, what I’m going to do is pay in the marketplace for health insurance for my family, just like millions of Americans.”

As Cruz explained, the reason why he has to buy his employer-based health insurance through the federal exchange is because of the Sen. Chuck Grassley (R-IA) amendment that said the only plans made to available to members of Congress with employer contributions must be through those exchanges. He accused President Barack Obama of creating an “illegal exemption” for Congress, which he has no intention of using.

Cruz rejected the suggest that following the law is “somehow less than principled.”

However, purchasing health insurance through Obamacare is not Cruz’s only option now that his wife has gone on unpaid leave. For one, he and his family could use the COBRA system to extend her health insurance for up to 18 months, though it would likely cost far more than his employer-based option and has a number of restrictions.

And if Cruz doesn’t want to go through the exchange, he has the option to purchase a plan directly from an insurance company. But in that case, he would receive no contribution from his employer — the U.S. government — and would end up paying a higher premium. So, ultimately, Obamacare may be the easiest and cheapest easiest health insurance option for Cruz.

Watch video below, via Daily Signal: