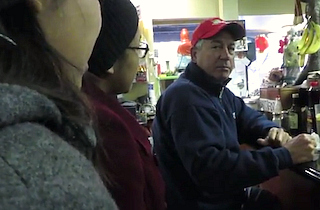 Jennifer Martinez, 16, and Carmen Lima, 13, found Boehner, clad in a ball cap and jeans, waiting for his breakfast at the diner, and cordially asked if they could speak with him while he waited.

“You’re a father right?” one asked. “So how would you feel if you had to tell your kids at the age of ten that you were never coming home?”

“That wouldn’t be good,” said Boehner.

Lima said that the very thing had happened to her.

“Well, I’m trying to find some way to get this thing done,” Boehner said. “It’s not easy. Not gonna be an easy path forward. But I’ve made it clear since the day after the election that I’m going to get this done.”

“So we can count on your vote for immigration reform?” Lima asked.

“I will try to find a way to move the bill forward,” Boehner said.

But later Wednesday morning, Boehner said he would not allow a House bill to go into conference with the Senate version, effectively dooming the reform effort.