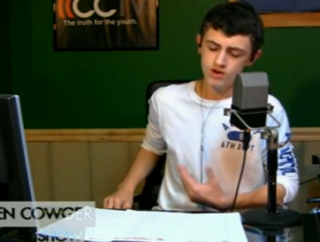 Teenage talk show host Caiden Cowger would like his listeners in West Virginia to know that alternate sexualities are not arbitrary and inherent in human beings, but “beliefs” that people choose to adopt in order to run afoul of the Bible. The 14-year-old, who has thousands of likes on Facebook, took to his show earlier this week to explain that it is, in his eyes, dangerous to tell people that “it’s ok, it gets better,” because it encourages people to turn gay.

“Homosexuality is a belief, it is not mandatory in that person,” Cowger told his audience. “That person is not born that way, no matter what Lady Gaga says,” he continued, noting that in his county, “we’ve got, I’d say, thirty teenagers in this county I’m at that are homosexuals, and it’s sickening.” He attacked them for “deciding, ‘I think I’m going to be gay'” because of support from, among others, President Obama. He also specifies that the big problem he sees is when others being gay prevents him from preaching, adding, “when you’re trying to teach them the word of God and they consider it bullying, yes I have a problem with that.”

So why is this kid’s rant on the radio important to anyone outside of his county and his listeners? Well, for one, his three thousand or so fans on Facebook are a sign he has quite the following of people who will nod in solidarity at his points. But more important than the adults here are both Cowger– who, as a 14-year-old, could not have come to these conclusions from life experiences or any critical thinking he has done himself– and those “thirty or so” kids that Cowger actively encourages his peers to remind of their reserved place in Hell. Whoever is enabling this will have to answer for the consequences when Cowger and his generation grows up and acts according to their beliefs.

Listen to Cowger’s rant below: