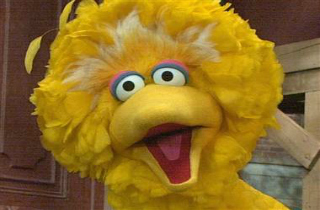 Which of these three still has traction coming out of the Denver debate?

The yellow-feathered icon, of course…

But this column isn’t about telling you what you already know. Rather, it’s a why-piece behind the short-sighted, bubble mentality that permeates cable news today.

As a former news writer and periodic on-air guest for three cable news networks, I became a keen observer of what ideas get the go-ahead, what narratives win and lose and what even gets ridiculed in pitch meetings when decisions are made on what makes air and what doesn’t.

The objectives of any cable news program today are simple:

• What’s the hottest story of the day?
• What else can we offer to compliment that hot story to makes our offering truly different from the other guys?
• What guest or guests can we book to debate and/or shape the narrative we just decided on?
• What story can help us be like Jon Stewart: Ya know, like, funny and engaging to those who likely think Dodd-Frank or Simpson-Bowles are law firms.

The moment Mitt Romney made the symbolic, relevant point (especially given the moderator works for PBS) that Big Bird represents what he says is the tough but necessary mindset America must adopt in order to truly reduce a debt that will otherwise bankrupt the country, you knew while sitting at home somewhere that an @FiredBigBird Twitter account was being created and followed.

Producers look at these trends, along with right or left-leaning web media outlets (conservative or liberal depending on the network) when building rundowns and automatically assume that their audience will want to hear more about those trends. Original thought goes out the window. The narrative viewers are subject to is now decided by Twitter and Yahoo! News.

Nope, not by instinct, originality, and most importantly, nothing too complex or intelligent that actually requires real effort when putting together a segment or package. In their minds, there’s simply no time to explore being a journalist.

The narrative that the funding of PBS only represents a fraction of the $16 trillion debt and therefore doesn’t need to be cut, or that Romney is mean for attacking a lovable children’s character, or that the President is a good guy for vowing to save it, is a collective insult to the American viewing public…most of whom are believed to be idiots in media circles. Regardless, the narrative gains steam as the cable networks get into a pissing contest over who can cover the story more.

In Chicago, the Obama campaign takes note of the overwhelming media coverage. The reactionaries running the messaging effort then decide to exploit Big Bird/Romney to their advantage by making it a so-called zinger in the President’s stump speeches.

Yup…the day after Obama is thumped by Romney and the polls begin to shift, the only sound bite everyone is playing concerns a sitting President crying fowl over Big Bird.

Based on that coverage and the momentum the campaign thinks it’s getting back, the Obama folks then decide to double down by creating an incoherent ad that somehow attempts to link Romney to Bernie Madoff, Ken Lay and Dennis Kozlowski (all indicted under Bush 43) by using the Big Bird argument (whatever that is).

The backlash is swift (See: MSNBC even rails against the ad), PBS asks the campaign to take it down, and FOX News gleefully highlights the whole debacle just described.

As Bernie Goldberg pointed out on The O’Reilly Factor recently, a story worth pursuing here is the following: If Sesame Street is an extremely profitable entity (WSJ: total assets of $289 million), why does it need support from the government and your tax dollars? Regardless of how relatively small the government subsidy is ($400 million), shavings do make a pile when finding enough modest cuts in wasteful programs to make a difference. And besides, PBS and its most profitable show could absolutely survive on its own without help from a cash-strapped government.

But that story was barely explored compared to what producers felt was a more entertaining tale:

Beats a sound bite about the debt ceiling…

This is one of the reasons why Romney pounded Obama by 52 points (according to Gallup) in the debate last week: Once the American public got an unfiltered look at the challenger, and discovered there weren’t horns coming out of his head as portrayed for months in ubiquitous campaign ads, and that he sounded, looked and acted like someone fit for the job, the whole race changed. People were clamoring for an adult discussion, free of spin, pundits and fixed cable news fights disguised at debates (three or four pundits from one side vs. one from the other), and got one.

Way back in the 20th Century, televised debates didn’t influence Presidential races as much simply because the media wasn’t as polarized. People trusted what they saw on the news more. Trusted more what they read. There were exceptions, of course, but there’s also a reason why 60 percent of Americans recently polled (Gallup) say they don’t trust the fourth estate.

In 2012, they know what they’re getting when Rachel “there was no clear winner in this debate” Maddow is an anchor.

Or when Sean “let’s loop this 2007 Obama ‘race’ tape more than the Reverend Wright’s ‘G-Damn America’ sermon from 2008” Hannity is leading post-debate coverage.

The days after Denver could have focused on specifics around the reasons why nearly 70 million people tuned in to watch: What each of the candidates, free of partisan crowds and teleprompters, were going to do about the economy, taxes, jobs, and health care.

Instead, for lack of a better idea, we get Big Bird.