The Big News You Didn’t Read This Week: The Atlas Shrugged Film Trilogy 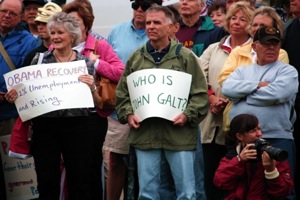 Did you know that the film that is potentially the magnum opus of the Tea Party movement is being split in three? And that, despite initial dire reports of economic woes and an inexperienced cast, production on the set of Atlas Shrugged is sailing smoothly? No, you don’t, because you were too busy staring at Andrew Breitbart’s Photoshop doodle of a literal “race card”— not that he didn’t also break that news.

Smack in the middle of the messy Shirley Sherrod race scandal, Breitbart’s Big Hollywood published an exclusive look at production on the set of Atlas Shrugged, the classic Ayn Rand novel that has skyrocketed to the top of bestseller lists on the back of support from conservative leaders like Glenn Beck and Rush Limbaugh. Editor-in-Chief John Nolte reports that the state of the film is much more positive than initial reports made it seem, and broke the news that the novel is set to be split into a trilogy, rather than cramming all 1,200 pages into a two-hour feature:

“Much has been made of the film’s reported budget of $5 million, especially for a project major studios have shied away from out of budgetary concerns. Like most smart producers, [Harmon] Kaslow won’t talk specifics, but there’s more to the story than the $5 million:

Kaslow assures the Randians: ‘The movie is a direct ‘adaptation’ of the book included using much of the dialogue written by Ayn Rand.’”

The cast is completely unknown, but also fiercely loyal to Rand and her vision of the film, meaning it’s either going to be one of the more well-adapted films based on a book in history, or it will be an unmitigated disaster. It’s a battle of experience versus passion. Either way, judging from the book sales and promotion of objectivism (in some capacity) by everyone from Beck to John Stossel to, apparently, Andrew Breitbart—and many on the left using Rand to paint the caricature of their ideological opponents that best suits them— it’s more than newsworthy.

The novel strikes at the heart of the greatest schism of the American right: that between authoritarianism and libertarianism, between social conservatism and little-l “liberalism.” Let’s just say there’s a reason Sarah Palin isn’t on the list of Rand enthusiasts that isn’t the obvious book length joke (the deliberate lack of emphasis on the family and overt natural talent of the protagonists are two that come to mind).

Whatever way we define Atlas Shrugged‘s place in the greater scheme of classic literature, its philosophy is at the cornerstone of the Tea Party movement, intentionally or not. Many of the ideas presented by the movement that seem a bit haphazard and arbitrary— the initial calls for the return to the gold standard, the belief that extreme socialism could actually overtake the nation in ways similar to how it has previously abroad, the abhorrence of any government aid to the underprivileged—align more coherently in the context of the book and the greater themes of Rand’s philosophy.

The small-government right may or may not be reading all 1,200 pages, but they are buying the book, promoting it, and channeling its ideas, meaning that, ultimately, it would not be irrational to expect the film to do brilliantly in the box office— at least the first one, which would not depend on the quality of any precursor. It makes sense that the producers would give Big Hollywood the exclusive, and it’s not a surprise that the film seems to be getting minimal support from the kind of crowd Big Hollywood specializes in heckling.

All of this is to say that the progress on the set of Atlas Shrugged is a much more important story to both pop culture and the political world than, say, the fact that an anonymous government employee may or may not have helped an anonymous farmer once, which makes her either a nice lady or a progressive fiend or a Russian spy and who even knows if these farmers actually exist at all? A story about a person who wields no political influence has been distorted, stretched out and spun so much that it’s been made to look like the defining issue of the midterm elections. As a nation, we have bigger fish to fry. The fact that a film with that kind of ideological baggage is set for release so close to the 2012 elections is something media spinsters should have on their radar. An Atlas Shrugged film means that all the would-be Randians too lazy to read the book or too young to care to watch The Fountainhead now have easy access to her philosophy, which, in large part, is the philosophy of the Tea Party Movement. A Shirley Sherrod YouTube video means… absolutely nothing.

Many who follow hard news were disillusioned with the fact that the media chose the Sherrod story over bigger national security and economic concerns, and while there is an argument to be made there, it is also unfair to ask the media not to cover, for lack of a better word, propaganda. Of more palpable, more specific concern here is that the media chose Breitbart’s Sherrod propaganda story—because race is a sexy thing to cover— over Breitbart’s story on the development of a sophisticated series of political films that can have a significant impact on the American right. The eager participation of the media, the White House, and the NAACP in the Sherrod case does not exonerate Breitbart for turning Sherrod’s life upside down to begin with, but it does emphasize how much the media and thus, the public, chooses to pass on interesting and potentially big stories to harp on issues that, ultimately, will do little to sway voters or change the political pulse of America.
[Photo via BeatCanvas]