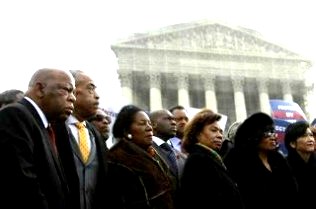 The season of Supreme Court decisions is nearly upon us. While culture watchers are eagerly anticipating the Court’s decisions relating to the Defense of Marriage Act and California’s Proposition 8 prohibition on gay marriage, political analysts are far more interested to see how the Court rules on the historic challenge to the 1965 Voting Rights Act. If the Court moves to strike portions of the law relating to the reapportionment preclearance provisions in Section 5 of the VRA, the wailing and rending of garments among liberal and progressive media commentators will dwarf the indignation they expressed over voter identification laws in 2012. Similarly, the focus on that decision and its impact on minority voters could drive up Hispanic and African-American turnout in the 2014 midterm elections. Conservatives may cheer the end of the VRA’s anti-federalist, arbitrarily enforced, preclearance mandates, but they may also be celebrating the eradication of the Republican Party’s chances of retaking the U.S. Senate.

While the Roberts Court is unpredictable, evidenced by its decision on the constitutionality of the Affordable Care Act last year, the evidence suggests that the Court will not look favorably on the VRA’s preclearance clause when, or if, they decide in Shelby County v. Holder.

In 2009, writing the minority opinion in Northwest Austin Municipal Utility Precinct No. One v. Holder, Supreme Court Chief Justice John Roberts expressed deep reservations about the constitutionality of the VRA’s preclearance provisions. Some Court watchers have interpreted Roberts’ opinion as a warning to Congress to address the problematic enforcement of the VRA before his Court has the opportunity to address it themselves. The fact that the majority decision in Shelby County could possibly be authored by Roberts himself should concern VRA supporters.

The summer of 2012 featured a disproportionate focus by liberal and progressive media outlets on proposed voter identification laws. Many liberal commentators suggested those laws would be used to disenfranchise minority voters. If the Court decides to strike down portions of the VRA, the outrage from those progressive outlets will be something to behold.

An admittedly premature look at how the midterm political landscape is shaping up ahead of the 2014 midterms appears positive for Republicans. The implementation of the ACA is already proving a massive electoral headache for Democrats – this effect is not expected to abate as the law’s enactment continues. Furthermore, a variety of scandals engulfing the president’s administration are expected to compound the Democratic Party’s problems. The midterm electorate traditionally does not usually favor the president’s party in his sixth year in office.

Furthermore, with 20 Democratic senators elected in the pro-Democratic 2008 wave election up for reelection, six of whom have opted not to seek reelection, the GOP has reason to be optimistic about their electoral prospects. Retirees in Montana, Iowa, South Dakota, and West Virginia provide the GOP excellent pickup opportunities, while unpopular incumbent Democrats in red states like Alaska, Arkansas, and Louisiana face tough odds in a midterm environment unfriendly to the party in power.

Presuming that the GOP nominates candidates without serious flaws for these seats, and that Rep. Edward Markey (D-MA) wins the special election in Massachusetts to replace Sec. John Kerry, the GOP has a better than even chance of winning the six seats it needs to retake the upper chamber of Congress.

But the outlook may be less rosy for Republicans next year if the Supreme Court strikes down all or portions of the VRA’s Section 5. The persistent drumbeat of outrage from liberal media outlets may have the effect of increasing minority turnout and dramatically decreasing the chances that Republicans can retake the Senate.

Minority turnout in midterm elections is often low. In 2006, Democrats owed their retaking of the House and the Senate to the swing among white voters. African-American and Hispanic turnout dropped by 1.9 and 0.3 percent respectively from 2004. Likewise, turnout among minorities in the 2010 midterm election dipped 4 percent from 2008 — 78 percent of the electorate was made up of white voters.

Rather than decreasing minority turnout in 2012, the regular railing against voter ID laws by liberal media outlets actually increased black and Hispanic turnout. While many of those proposed laws had not even been enacted in the states in which they were proposed, the threat those laws were made out to pose to minority enfranchisement, progressives claimed, had the effect of driving black and Hispanic voters to the polls in droves.

According to Brookings Institution demographer William Frey, African-Americans made up 13 percent of the 2012 electorate in spite of their consisting of only 12 percent of all eligible voters. In concert with a drop in white turnout in 2012, this made up for an electorate that almost precisely mirrored the partisan makeup of the historic 2008 electorate when America elected its first black president.

“There were huge organizing efforts in the black, Hispanic and Asian communities, more than there would’ve been, as a direct result of the voter suppression efforts,” Matt Barreto, co-founder of Latino Decisions, told The Nation magazine in November, 2012.

Rest assured, if the Supreme Court strikes down portions of the VRA, the sturm und drang that liberal media outlets conjured over voter ID laws in 2012 will appear muted and deliberative in comparison to 2013’s fury. The ire of progressives may have the effect of driving up minority turnout in the 2014 midterms to historically unprecedented levels, effectively neutralizing the edge that conservatives should enjoy next year.

In private, Democrats may just be hoping that the Supreme Court sides with federalism and strikes down the VRA’s Section 5. It may redound to their electoral benefit in ways they could only hope for.