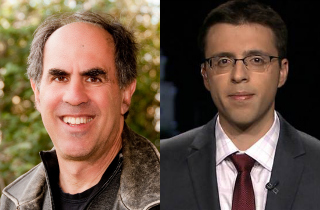 You’re all thinking it, and I’m going to say it: Ezra Klein is a know-it-all. The MSNBC contributor and overlord of The Washington Post‘s Wonkblog is a whippersnapping, hip-to-be-square chart-pimp who hides his self-satisfaction beneath an air of competent “humility.” He never says it out loud, but you can just feel his judgment: I’m smarter than you.

Well, let’s see how Perfesser Klein handles The Daily Caller’s Mickey Kaus, who set out to prove that the über-wonk is an über-fraud because of Electronic Medical Records (EMR).

It’s true that Ezra Klein is on my “side,” and has never demonstrated anything but a straightforward command of policy, even when the news isn’t particularly good, and considering the persecution I faced as the oldest rookie in the White House press, you would think I’d resist the urge to bathe in “these damn kids” resentment, but when I saw Kaus’ piece, part of me was happy. I was scanning the archives of FishbowlDC to see if I could find some of the posts that they’re being sued over, even though I knew they had all been deleted, when Betsy Rothstein popped up and promised that Kaus had not just taken Ezra Klein down, but had delivered an intellectual beatdown that she likened to “Mike Tyson beat(ing) up a little kid.”

Klein has been in the forefront of parroting the Democrat’s line that digitizing records would be a goldmine of savings to taxpayers, only they haven’t been. In a post today, Kaus deconstructs Klein’s history, concluding, “Hoaxer, self-hoaxer, or just confused? When they are through with Manti Te’o maybe the nation’s amateur detectives can turn to Klein.”

The piece points out of how the wunderkind might not be all that wunder-full. And, just as brutal, puts yet another nail in a coffin that would have had a watertight seal by now were it containing anyone other than the lead boy-bander.

It seemed like a bit of a stretch that a single, somewhat obscure issue like EMR could put a nail into Ezra Klein’s career coffin, but maybe Kaus could at least take him down a peg. Carpentry!

Kaus laid out the case against Klein in his opening paragraph:

The Education of Ezra Klein (and Barack Obama) continues: In 2007, Young Ezra Klein was full of enthusiasm about the cost-saving potential of electronic record keeping in the health industry.  The failure to rapidly adopt this new technology was nothing less than an indictment of the American Way of Medicine…

Kaus goes on to explain that Electronic Medical Records never caught on, and the cost savings that Ezra Klein was so full of enthusiasm about never materialized. By “never caught on,” of course, he means “in half the time it was supposed to catch on,” but EMR isn’t really the issue here, it’s Ezra Klein’s enamoration with the $81 billion in annual savings that, let’s face it, were always a massive overreach. Even Kaus admits that EMR may yet succeed once the kinks are ironed out, and its use becomes more widespread. The problem is with the pie-in-the-sky $81 billion in savings that Klein keeps droning on about. This is Kaus’ knockout punch:

Comes now the RAND corporation to tell us that the projected cost-saving benefits of electronic medical records have not materialized. From the NYT‘s report…

Nice! Ezra Klein spends years pimping the $81 billion in annual savings from EMR, and the RAND Corporation comes along and smashes him to bits! Time for Mickey Kaus to get a face tattoo. Let’s see you chart your way out of this one, chart boy!

Kaus even finishes Klein off with a link to Ezra’s own blog, in which “Klein’s ‘Wonkblog’ colleague, Sarah Kliff, ends her recent analysis on a decidedly agnostic note…”

Oh, snap, you just got pushed off the Sarah Kliff!

Here’s the problem: In all of the Ezra Klein posts that Kaus links to, Klein never once mentions the $81 billion in savings, and only mentions costs at all as a side-benefit. He seems much more concerned about not dying:

Imagine walking into a bank where clerks scrawled all your information in a giant ledger book. You’d run out and tweet all your friends about this hilarious bank from the 18th century. But we actually let people do this with our medical records, and then some of us die or have serious problems because our records get lost or our doctor’s handwriting is illegible.

Indeed, most of the objections raised by Kaus’ experts are of the “EMR will steal your soul!” variety, objections that are entirely about human error, greed, and fraud, and not at all about the technology. Everyone agrees that this technology, when properly applied, saves lives.

Here’s the best part, though. Remember the impressive source that Kaus used to impeach the $81 billion savings that Ezra Klein never, ever touted? The RAND Corporation? It turns out Klein’s Wonkblog colleague Sarah Kliff has heard of them:

Back in 2005, researchers at the influential RAND Corp. made an optimistic prediction: Digitizing electronic medical records could save the health-care system at least $81 billion annually.

That’s right, the source that Mickey Kaus used to refute something Ezra Klein  never ever said is actually the source of the thing Kaus is refuting. To quote Mickey Kaus, “Hoaxer, self-hoaxer, or just confused?”

The source of Kaus’ stiffie for Ezra Klein is evident in the opening-graf reference to “Young Ezra Klein,” but the subtextual drama, while amusing, isn’t really the point. Surely, Ezra Klein’s career can survive the reproach of Mickey Kaus, and even of Betsy Rothstein.

The problem is that any reader of Kaus’ column would come away with a distorted view of Electronic Medical Records, a potentially life-saving technology that Kaus methodically builds a case against, all so he can take down a colleague he obviously doesn’t like. That’s not how any journalist, even an “opinion” journalist, should handle a life-and-death issue, because even if you don’t feel a duty to serve the public, you have a duty not to harm it. If there are any doctors on the fence about adopting EMR, they shouldn’t be swayed by Mickey Kaus’ resentment toward Young Ezra Klein.

Update: Apparently, everyone in the world except me knows that Mickey Kaus has been tilting at Ezra Klein since MySpace was popular, and has even repeatedly called him a “whippersnapper” in print.