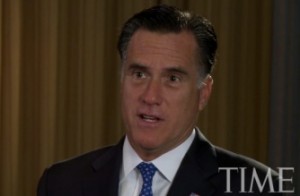 Presumptive Republican presidential nominee Mitt Romney granted a rare extensive interview to Time‘s Mark Halperin, the first since his record at Bain Capital became the subject of a national brouhaha. While political pundits have focused on Romney’s evasions on that record, and almost everything else, the real “tell” from that interview is in one of the few areas in which the candidate got specific, but most Americans will never know it.

Romney’s evasions are significant, of course. When Halperin asked the former Massachusetts Governor “what specific skills or policies did you learn at Bain that would help you create an environment where jobs would be created,” Romney rambled on for awhile before settling on “I understand, for instance, how to read a balance sheet.”

Halperin, to his credit, pointed out that “a lot of people in America” know how to read a balance sheet (including every first-semester business student), and pressed him for more detail. Romney essentially countered with his keen ability to read an electric bill. “I understand that in some industries, the input cost of energy is a major factor in whether an industry is going to locate in the United States or go elsewhere.  So, when, at Bain Capital, we started a new steel company called Steel Dynamics in Indiana, the cost of energy was a very important factor to the success of that enterprise,” he told Halperin.

Twice, Romney was asked if he welcomed scrutiny of his record at Bain Capital, a record he has touted endlessly as his best argument for election to the presidency, and twice, he deflected the question. Strike one:

Halperin: So when the President says he wants to focus a lot of the election and debate on your career at Bain Capital, do you welcome that?

Romney: Well, of course, I’d like to also focus on his record.

Halperin: But you welcome scrutiny of your business record, is that right?

The interview also made news when Romney revised his dream unemployment number up, from 4% a few weeks ago to 6% yesterday. He was unable or unwilling to single out any part of his 59 point plan as new or innovative, but did single out PBS as something he’d like to cut in order to reduce the deficit. The only other specifics Romney offered during the interview were the repeals of Obamacare and the Dodd-Frank financial regulatory reform.

There was one other area in which Gov. Romney offered striking specificity, and revealed the most about either his character or his qualifications, depending on your view of his expertise. Asked by Halperin what he would do about Americans with pre-existing conditions (who cannot be denied coverage under Obamacare, starting in 2014), here’s what Romney had to say: (emphasis mine)

If people have been continuously insured, and then they decide to change jobs or change locations, they should not be denied coverage if they go to a new place or have to get a new policy. So people continuously insured should be able to get new insurance. Therefore, those that have developed a condition while they were insured and then change jobs, lose jobs, go to a new place, apply for new insurance would be guaranteed issue in that new entity so that you don’t have to have people worried about a preexisting condition preventing them from becoming insured.

Romney has floated this garbage before, and nobody noticed he was proposing something that’s already the law, and I expect no one will notice this time. Romney’s evasions make for better political panel chats, and few journalists probably understand this policy well enough to press Romney on it, even if they were inclined to. Yes, it is significant to note what Romney doesn’t want to talk about, but it’s just as significant that the few things he is willing to talk about reveal this level of naked dishonesty.