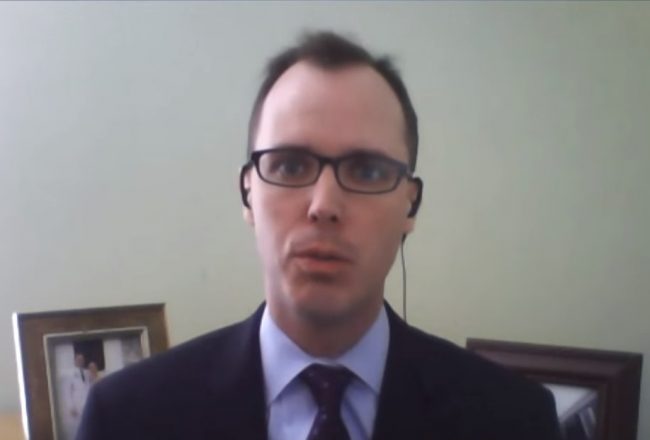 Sean Davis — conservative writer and editor of a right-wing website with a focus on “black crime” — pulled a by-your-logic debate tactic to make a point about the media’s supposed double standard on Russian collusion on Monday, accusing journalist Julia Ioffe of “colluding” with a “Kremlin-connected” source.

While Ioffe tweeted about a discussion she had with a source close to the Russian government, the co-founder of The Federalist took the opportunity to demonstrate some almost impressive intentional ignorance to get in a snipe at The Atlantic writer.

Just talked to a source in Moscow who is close to the Foreign Ministry. “The whole world is laughing at America,” he said. “America has never been as ridiculous as it is now.

Davis responded to her post with one of his own, writing: “Judging by standards set by media over the last year, doesn’t this constitute an admission of colluding with Kremlin-connected Russians to undermine American democracy?”

Judging by standards set by media over the last year, doesn’t this constitute an admission of colluding with Kremlin-connected Russians to undermine American democracy? https://t.co/uGEm6ivvxB

Labeling a conversation between a journalist and a source as “collusion” is obviously ridiculous, but the tweet does a good job of representing a classic Federalist media criticism tactic. Davis and his crew of plagiarists, defenders of credibly accused pedophiles, “black crime” watchdogs, protectors of “white Americans,” and Obama-boner-truthers often accuse the mainstream media of hypocrisy by using impressive logical leaps to conclude those outlets don’t live up to their own standards.

In this case, the always-astute Davis called out Ioffe for talking to a Russian source, and yet (AHA!) Donald Trump Jr., Jared Kushner, Jeff Sessions, and other allies of President Donald Trump all received harsh criticism for doing the same thing.

Of course, Ioffe’s reporting is entirely different than a campaign trying to solicit Kremlin-tied dirt on Hillary Clinton to win a presidential race — but that detail is clearly too insignificant for Davis’ brain-genius online debate tactics.

Taking a page out of Axios‘ book, to “go deeper” on Davis’ Twitter habits reveals the editor is a serial internet blocker, à la Russia sleuth Eric Garland and fired Trump assistant Seb Gorka. It’s almost easier to keep track of the media people Davis hasn’t blocked than count the ones he has.

Even an online personality as uncontroversial as the Wall Street Journal‘s Byron Tau managed to get hit with a block on Monday by the king of whataboutism:

Gonna re-up those @seanmdav tweets just so the public record is clear about who was spreading “deliberate misinformation.” pic.twitter.com/Co2d3IelXN