The Filibuster’s Top 10 Winners and Losers

The Filibuster’s Top 10 Winners and Losers 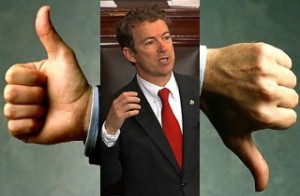 As the nation continues to reflect on Senator Rand Paul’s filibuster, let’s take a look at some of the winners and losers of the historic event.

WINNERS
(aside from Rand Paul, in no particular order)

1) Civil liberties: It’s not a question of, as some described it, “Don’t drone me, bro!” awareness. Rather, a general discussion of civil liberties is now on the tip of everyone’s lips, even in the tricky case of civil liberties as they relate to combatting terrorism (Are ‘kill lists’ acceptable? What constitutes an ‘imminent threat’?). More so, conservatives demonstrated that, in the current age, as it was in the past, this is and can be a key element – a mantle, a tenet – of the Right.

2) Libertarianism: Clearly. While it remains to be seen whether this will last, those 13 hours may possibly be considered the moment libertarianism was officially embraced by the Right – or at least by the ‘new Right’ led by Paul & Company.

3) Twitter: When Ted Cruz spent a good portion of time reading Tweets aloud on the floor, to provide Paul with encouragement, this was a historical first. Cruz wasn’t reading Facebook comments or network news’ pundits’ remarks. These were Tweets … and these were Tweets from everyday Americans, including a grandmother who noted she had learned to Tweet that evening solely in order to stand with Rand. (Hey Dick Costolo, you got at least one new Twitter user out of the gig.) Behold, the power of Twitter.

4) Ted Cruz: (and not for the obvious reasons: e.g., his steadfast support throughout much the filibuster — he and Sen. Mike Lee were the first of the cavalry to arrive — and his impressive oratorical skills). What was most interesting about Cruz is the different side he showed. While Cruz rode to national prominence (and national criticism) with his staunch opposition to Chuck Hagel, prompting some to write him off as too much of a defense hawk, there was Cruz at the filibuster, vigorously supporting Rand, quoting another Rand (Ayn), and, at times, sounding like quite the libertarian himself. The message? Cruz is no one-dimensional pony. Also worth noting: he demonstrated one can fight for strong national security and defense, while also objecting to the disregard of due process. The two beliefs are not mutually exclusive.

5) the GOP: Sure, it was really a libertarian night. But, make no mistake, all those participants have an “(R)” by their name. It’s no wonder that GOP Chair Reince Priebus rallied the party’s senators to hurry on over and support Paul on the floor. Most conservatives watching, bedraggled after months of post-election infighting, felt a sense of community once again. It was fun, reinvigorating, inspiring, and, as the filibuster continued, a feeling of ‘camaraderie in the bunker’ ensued for the ‘Randnighter,’ as thousands vowed to stay up, glued to their screens, in solidarity with Rand. Priebus later described the filibuster as “completely awesome,” citing the unity amongst conservatives the filibuster enabled.

6) Rush Limbaugh: While McCain harshly criticized the filibuster’s participants, Limbaugh unequivocally called them “heroes.” The radio host and long-running voice of mainstream conservatives, who is often (and recently) the target of guffaws and sneers by those eager to distinguish themselves, revealed (as he is wont to do, on more occasions than he is given credit for) a refreshing outlook, surprising a few of his naysayers by fiercely praising Rand. To those who say Rush is out of step … well, Rush has still got it (more on that below).

7) the Fifth Amendment: Most Americans know the First, the Second, and probably the Tenth – but the Fifth? Welcome to the limelight, Mr. Due Process.

8) Glenn Greenwald (and others whose work Rand referenced on the Senate floor during the historical filibuster): That’s just pretty darn sweet (and well deserved).

9) America’s image: At some point in the evening, #StandWithRand was the #1 trending topic on Twitter… worldwide. Tweets from around the globe poured in on the hashtag, expressing support (let’s face it — a rarity, ever since the Bush years). How many abroad watched the online stream? How many marveled at the brilliance of the American procedural system? It was a shining moment reminding the world that, yes, this still is the cradle of liberty and, yes, that’s a U.S. Senator you see, who has not urinated in 13 hours, fighting for due process. For many Americans, it was a (well earned) bragging-rights moment.

10) Bipartisanship: When Code Pink activists Tweeted a photo of support for a Republican senator, complete with a “Stand with Rand!” homemade sign in the shape of a heart … no, hell hadn’t frozen over. It was a worthwhile reminder that, despite the fiercely partisan nature of American politics, sometimes an idea is noble enough to unite common foes.

And, in that spirit of bipartanship (ahem!), let’s move onto … the filibuster’s losers!

LOSERS
(again, in no particular order)

“I’ll tell you who else upset by this [the filibuster’s impact], and I’ll explain this as the program unfolds.  The neo-cons are paranoid.  The neo-cons are paranoid because Rand Paul comes from his father’s gene pool. This isolationist wing [it’s likely Rush meant to say the ‘interventionist’ – not ‘isolationist’ wing here] is worried about maybe there’s something more going on here than simply opposing drone strikes. There’s all kinds of ramifications. Well, they might think he’s a kook, but they’re worried that he’s a kook that nobody thinks is a kook…. Let me put it this way.  They, I think, are worried that Rand Paul might be skillful enough to move the Republican mainstream away from the McCain, Kristol, neo-conservatism view of the world and toward a position that is not as extreme as his father’s, but is suspicious of interventionism, suspicious of Islamic democracy building, suspicious of financial and military support for dubious regimes. So there’s all kinds of stuff happening with this filibuster.”

Did Paul, in an indirect way, bring non-interventionism (or, at least, a healthy skepticism of it) into the mainstream? Will he? It appears so. Even McCain, during a Friday appearance on Shep Smith’s show, bristled at Smith referring to him as an ‘interventionist.’

2) John McCain: The man who many conservatives deride as quintessential ‘establishment’ and as the poster-child for RINO’s (Republican in Name Only) has been on shaky ground for several years. Dining with the President during the filibuster may have been the nail in the coffin. Could he make it even worse? Oh, yes! In a Huffington Post interview the following day, McCain went on to refer to Paul, Cruz, and Rep. Justin Amash (an up-and-coming libertarian-leaning star of the House Republicans) as “wacko birds.” The imagery of the ornery old-guard at odds with the fresh new blood could not be more apparent — or more detrimental — for McCain.

Amash responded via Twitter with: “Sen McCain called @SenRrandPaul @SenTedCruz & me ‘wacko birds.’ Bravo, Senator. You got us. Did you come up with that at #DinnerWithBarack?”

3) Lindsey Graham: After riding high with mainstream conservatives following his firm opposition to Hagel, Graham went the way of McCain. As Politico reported on Thursday: “Laced throughout the thousands of tweets cheering on the filibustering Kentucky Republican was a vicious, visceral anger aimed squarely at the South Carolinian up for reelection next year. The rallying cry hashtag: #PrimaryGraham.” Joining McCain on the Senate floor Thursday, he criticized and mocked the filibuster – then doubled-down by changing his vote to now confirm Brennan, stating the filibuster had caused the Brennan vote to become a referendum on the drone program he supports. Oh, Lindsey…

4) Drones: To be sure, Paul’s argument was against the use of drones on American citizens on American soil. Nonetheless, it brought the discussion of drones into the mainstream which, whether one is for or against drones’ use in varying circumstances, is a necessary national conversation. Journalists like Glenn Greenwald and David Seaman have pleaded for attention to this for quite some time and must be breathing a sigh of relief.

5) Lincoln: Any discussion about the overreach of executive power, or the dismissal of due process for American citizens, inevitably triggers reminders of the ‘ugly side’ of Honest Abe’s acts. First the Oscars give him the shaft, and now this.

7) Executive power: You’re on the hot seat more than ever. Good luck with that.

8) Marco Rubio: While Rubio held ‘top contender for the GOP nomination’ status prior to March 6th, the filibuster catapulted Paul into a neck-and-neck contest. There are currently two stars (maybe even three, counting Cruz) gunning for that golden-boy slot and it’s anyone’s game. On Friday CNN.com’s Mo Elleithee wrote an Op-Ed entitled, “New leader of the GOP: Rand Paul,” contrasting Paul’s new status with Time’s ‘Republican savior’ Rubio cover from only a few weeks ago. All in all, the filibuster was not a good day for the junior senator from Florida: (a) Rubio was, at first, conspicuously absent, prompting a wave of critical Tweets that undoubtedly helped prompt his appearance (4 hours after the filibuster began), despite initial reports he was snowed in; (b) When taking the floor again in the evening, he spoke immediately following Cruz’s powerful speech, leading to inevitable comparisons between the two. While Cruz exceled (his invocation of the St. Crispin’s Day speech had jaws dropping and tears streaming), Rubio seemed disheveled, off his game, and his references to Wiz Khalifa, Jay-Z, and The Godfather (following Cruz’s references to Henry V, Ayn Rand, and Patton), while amusing, did not seem to appreciate the somber moment and simply fell flat; (c) Perhaps most importantly, Rubio never seemed to be in strong agreement regarding the substance of Paul’s argument but instead mostly narrowed his concern to Paul’s ‘right to an answer.’ To be fair, Rubio’s presence was key, made an impact, and at times he seemed genuinely impassioned, but overall it was not a shining moment for him as it was for others.

9) Eric Holder: His response on Thursday to Paul’s question was remarkably short and, reading it, one can almost hear the gritting of teeth as it was dictated. As Mediaite’s Noah Rothman noted, Tweeting an image of the letter, “This is what it sounds like when you really don’t want to write a letter.”

10) President Obama: The filibuster was a black eye for the President, both on a national and international scale, of yet-to-be-determined proportions. Having campaigned as the anti-Bush, yet carrying on the use of drones and, worse yet, (initially) refusing to answer direct questions on how those drones may be used, will continue to be a massive controversy of his second term.