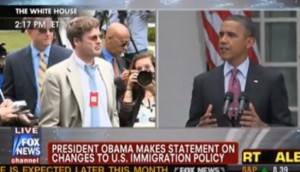 Since Daily Caller reporter Neil Munro issued the Heckle Heard ‘Round The World on Friday, there has been copious debate over whether Munro was being disrespectful (he was), racist (he wasn’t, but his site’s culture of race-baiting likely egged him on), unprofessional (most definitely), or just an aggressive journalist (no). But as a working White House reporter, I have yet to hear anyone explain the fundamental reason Munro’s actions were unacceptable, and need to be sanctioned.

First and foremost, though, Neil Munro is a liar. No White House reporter believes that Munro thought the President was finished speaking four minutes into his remarks, and that cowardly attempt to save his day-pass doesn’t explain his subsequent interruptions. The stunt was obviously premeditated, and probably sanctioned, if not thought up by, Tucker Carlson, who is “proud” of Munro for soiling himself in the Rose Garden.

Munro was most decidedly disrespectful, and while that’s not a good thing, it isn’t a fatal flaw. Munro and Carlson have tried to hide behind Sam Donaldson‘s shouting of questions at Ronald Reagan to justify this. While this doesn’t happen all the time, reporters frequently yell questions to the President following remarks. I’ve shouted questions to President Obama from The Rose Garden, the East Room, and very loudly from the Marine One rope line. The press office doesn’t love this, but it’s considered within bounds.

Similarly, we’ll often try to get the President’s attention at the end of a press conference, even though we all know he works from a list. Sometimes, just letting the President hear your question can serve a purpose. For example, then-CBS News White House correspondent Chip Reid asked the President a question at the signing of the Freedom of the Press Act, even though it was a pooled press only event, with no question period. Reid broke protocol by asking a question in this setting, which is the kind of “Would you please pass the jelly?” misdemeanor that some are trying to pass this off as.

But one thing we don’t do is interrupt the President during announcements, speeches, or other events where he’s delivering prepared remarks. Munro defended his actions by contemptuously defaming his colleagues as unwilling to ask tough questions, which simply isn’t true, and further stuck a thumb in the eye of every reporter on the beat by violating an important protocol.

Does Munro think that every reporter in that Rose Garden wouldn’t have loved to have asked the President a question, hasn’t achieved their position through hard work? His attempt to take a shortcut around that was insulting, but also not the real problem.

If we all just decided to yell out a question whenever we felt strongly about it, the President would never get through a single set of remarks, as evidenced by the post-press conference free-for-alls that Munro cites in his defense. This isn’t just a White House protocol, it’s part of being a professional reporter. See how long you’d stay on the Romney bus doing that. If you want to be some kind of heckling ambush reporter, that’s fine, but then you need to find your own way within earshot of the President. Good luck with that.

Munro doesn’t have a hard pass to revoke, but the White House needs to sanction him in some way, with at least a lengthy suspension. Not to do so risks turning every presidential announcement into a chaotic, inaudible mess, and insults all of the reporters who abide by this minimal standard of professionalism.

Here’s the clip of Munro’s heckling again, so you can see how he repeatedly “accidentally” interrupted the President: