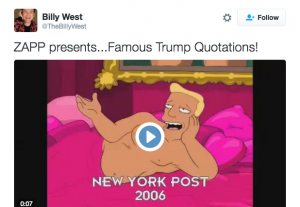 Shows like The Simpsons, Southpark, and Futurama thrill adults. They’re cynical and witty but they’re also cartoons. Everyone wins! They lampoon current events flawlessly but they’re also just little drawn characters running around and getting into zany situations. Good content!

Even politicians get into these shows. Ted Cruz “auditioned” to be on The Simpsons, remember? The only problem is that the producers, creators, and talent on the show don’t always love the politicians back. One of the most prominent Simpsons voice actors slapped Cruz down after the audition video came out.

Now, one of Futurama‘s biggest stars is getting in on the pol-slapping action. Billy West, the guy who voiced Zapp Brannigan, brought his character’s unique speaking style to some of Donald Trump‘s more famous quotes. If you’re not familiar, Brannigan is a very clueless, very misogynistic pilot who thinks he is totally irresistible and amazing and never realizes (or at least admits) he’s kind of a joke. Oh, yeah, and he’s cripplingly insecure. Mediaite’s Sam Reisman describes him as a “monumentally incompetent guy” who has managed to convince other people to buy into his reputation as a hero.

From quips on his hair to his long fingers, West nailed some of the most Brannigan-ian Trump quotes as only a wildly successful space captain could.