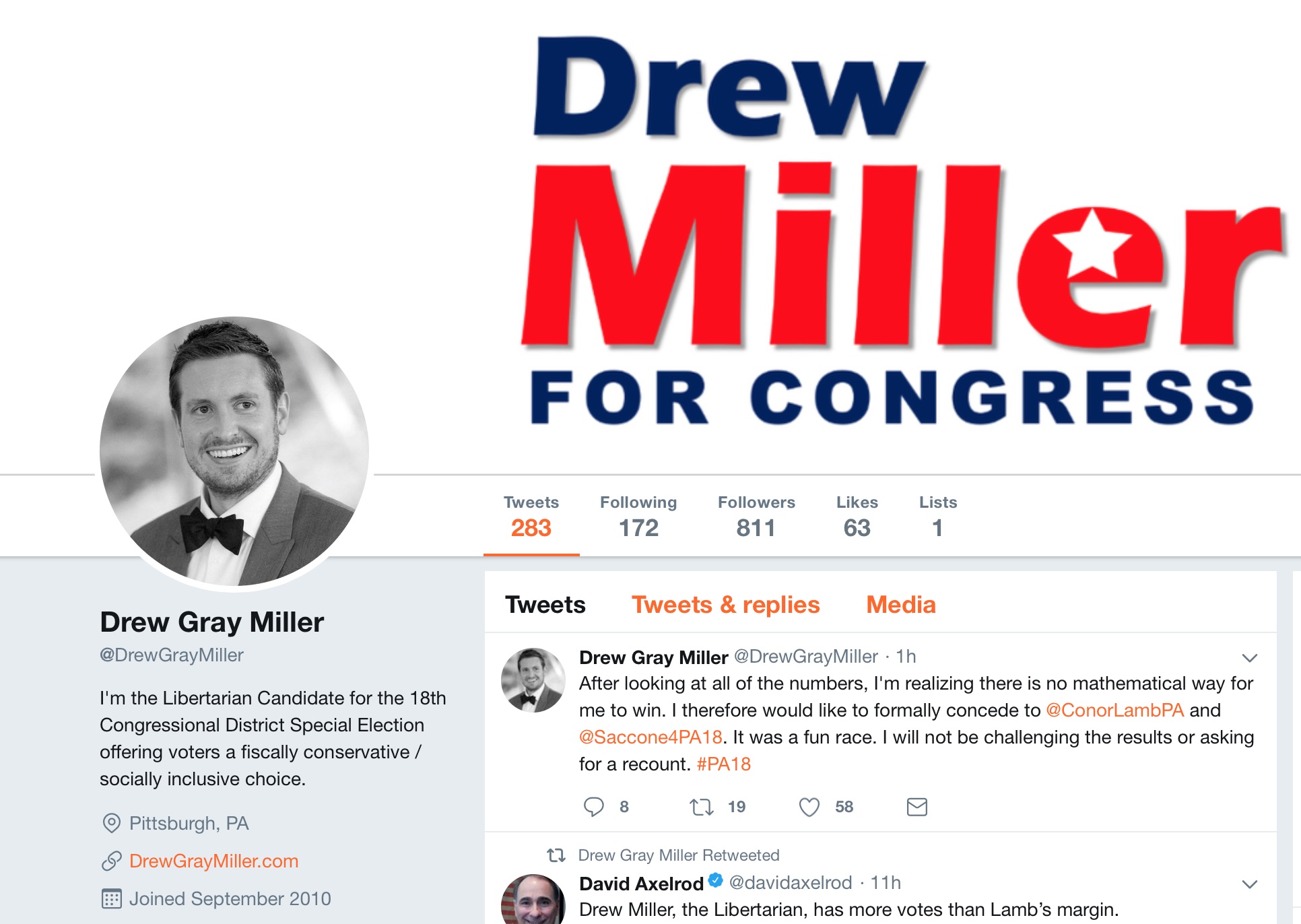 Believe it or not, there were three candidates running in special election in Pennsylvania’s 18th district.

While Democratic candidate Conor Lamb and Republican candidate Rick Saccone are separated by only hundreds of votes in a razor-sharp election, libertarian candidate Drew Miller came in at a distant third.

Miller may not have raised as much money as Lamb or received the support of the president at a rally like Saccone, but he certainly had the best Twitter feed as the ballots were being counted.

He began by invoking David and Goliath and sharing a beer-inspired graphic to urge his roughly 800 followers to get out and vote.

David and Goliath was my favorite story growing up. Let’s end the duopoly and send a message to Washington in today’s #PA18 election that we’re tired of business as usual. It’s #MillerTime #VoteMiller

Miller expressed a “glass half-full” attitude when he learned he appeared at the bottom of the ballot in Allegheny County.

I’m glad @Allegheny_Co put me at the bottom of the #PA18 ballot. It’s always good to #SaveTheBestForLast pic.twitter.com/1tWnG1uqZk

He then tweeted that he was going to send the winner of the election a 6-pack of Miller High Life and that he’ll “probably send one to the loser too.”

I have the home addresses of @ConorLambPA and @Saccone4PA18. If I lose the #PA18 election, I’ll send the winner a 6-pack of @millerhighlife…I’ll probably send one to the loser too. #MillerTime

Miller later called out CNN and specifically Wolf Blitzer and Jake Tapper for a lack of acknowledgement of his candidacy.

I gave my photo to @CNN. Come on, @wolfblitzer, @jaketapper. You KNOW there are THREE options. #PA18

He acknowledged how close the race was and how the number of votes he earned was more than the difference between Lamb and Saccone. And he took note of the fact that he .

And early Wednesday morning, before an actual winner was declared, Miller “formally” conceded from the race because there was “no mathematical way” for him to win.

After looking at all of the numbers, I’m realizing there is no mathematical way for me to win. I therefore would like to formally concede to @ConorLambPA and @Saccone4PA18. It was a fun race. I will not be challenging the results or asking for a recount. #PA18

Well, he may have lost the election, but he certainly won on Twitter.