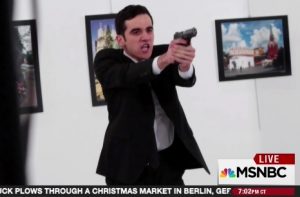 The New York Daily News published an op-ed Tuesday that openly cheered the assassination of a foreign ambassador and steadfastly denied that it was terrorism.

“Justice has been served,” writes NYDN‘s Gersh Kuntzman on the murder of Russia ambassador Andrey Karlov by a Turkish policemen. Karlov, he explained, deserved to die because his job was to represent the foreign policy of Vladimir Putin abroad:

Karlov’s job in Turkey was to ease tensions over Russia’s atrocities in Syria and its incursions inside Turkey itself — meaning his job was to enable and normalize Vladimir Putin. Given that role, he wasn’t a diplomat, but a soldier, and his death is the same whether it came on a battlefield outside Aleppo or in an art gallery in Ankara. His killer was also a soldier — not a terrorist, mind you, but a soldier. Terrorists kill innocent people with trucks in Christmas markets or with planes in skyscrapers. Soldiers kill their fellow soldiers.

I won’t mince words: there is no difference between Kuntzman’s logic (and I use the term loosely) and that of every terrorist who has ever lived. If a Russian ambassador is a “soldier” in its war, than every American ambassador is a soldier in our wars, as are our judges and our politicians and our president. From there, it’s no stretch to say that in a democratic society, the people are equally guilty for “enabling and normalizing” their government’s crimes (remember Ward Churchill‘s “chickens coming home to roost”?). And for every Westerner loudly proclaiming Russia is participating in unjust, evil, and imperialist wars, there is an Eastern bloc-er or Middle Easterner saying the same of us.

I say this not because I’m a relativist who actually believes the ills of the West and Russia are equal. But the logic underpinning Kuntzman’s argument– the murder of non-combatants is justified when they support a foreign policy I consider sufficiently evil– is a greenlight for any would-be assassin or terrorist who has enough confidence in their own moral certitude.

To put it another way:

Ambassador Chris Stephens‘ job in Libya was to ease tensions over the United States’ atrocities in the Muslim world and its incursions inside Libya itself — meaning his job was to enable and normalize American imperialism. Given that role, he wasn’t a diplomat, but a soldier, and his death is the same whether it came on a battlefield outside Tripoli or in an embassy in Benghazi. His killers were also soldiers — not terrorists, mind you, but soldiers. Terrorists kill innocent people with drones or planes from the sky. Soldiers kill their fellow soldiers.

Even if you believe that the ends justify the means, terror and assassination only emboldens hardliners opposed to your cause. For example, Kuntzman approvingly compares Monday’s assassination to the murder of Nazi ambassador Ernst vom Rath at the hands of a French Jew in 1938. What he conveniently forgot to mention is that the Rath murder was then used to justify the mass murders, riots, and destruction of Jewish property on Kristallnacht.

If you’re really not concerned that Kuntzman thinks the assassination was justified because the ambassador was a pawn of Putin, recall how many liberals also argue that president-elect Donald Trump is a pawn of Putin. If a Russian ambassador deserves death for “normalizing Putin,” what does that say about Trump? What about those who then support and enable Trump? In today’s hyper-charged political atmosphere in which everyone who disagrees with you is the next Hitler, Kuntzman just argued that every politician is fair game.

Will I mourn Karlov? No, probably not. But I’m not so short-sighted to cheer terrorism just because I sympathize with a murderer’s cause.