The Obama Administration’s Many Voices on Libya 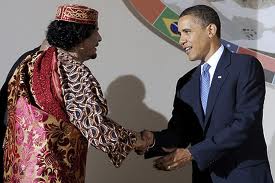 The Obama administration’s handling of the Libyan crisis has been characterized by complacency, confusion and inaction. While the American public, the international community and the Libyan “rebels” have waited patiently for clear directives, prior to today’s military strike, the administration has offered little more than mixed messages and empty promises.

President Obama refusal to lead has made the U.S. look weak and ill-equipped. Furthermore, his inability to set policy and communicate it effectively through his staff is disturbing and deserves critical examination. Now, after more than 30 days of letting the situation fester, the president has joined international partners in militarily handing the disaster. What took so long for the president to truly involve himself in the process?

Back in February, the officials approached the situation with caution. Secretary of State Hillary Clinton called Libya’s initial attacks on its people “completely unacceptable,” while President Obama called for an end to Muammar Al-Gaddafi regime. Still, the overall tone was one of guarded cautiousness. At the time, this was a prudent approach, considering that American citizens were trying to escape Libya; unsavory public comments by U.S. officials had the potential to put them in danger.

But, as time proceeded and as Gaddafi continued his brutal assault on his populace, the Obama administration appeared paralyzed, disinterested and unable or unwilling to lead discussions with international leaders. Then, the White House’s communicative process appeared to very publically fall apart at the seams.

In early March, while testifying in front of the Senate Armed Services Committee, National Intelligence Director James Clapper stated his belief that Gaddafi would ultimately be victorious. He said,

“I think, longer term, the regime will prevail…I do believe Gadhafi is in this for the long haul. I don’t think he has any intention, despite some of the press speculation to the contrary, of leaving. From all evidence that we have…he appears to be hunkering down for the duration.”

In a bizarre address, Obama claimed – just one day after Clapper’s testimony – that the world was “tightening the noose” on Gaddafi. The president called Clapper’s words “a hard-headed assessment about military capability” and said that they did not necessarily reflect policy. Aside from the fact that such an excuse is weak at best, something is fundamentally wrong when the nation’s top intelligence director – an individual President Obama claims to meet with daily, if not regularly – is publically contradicting the commander-in-chief.

Meanwhile, while the Obama administration couldn’t decide if it thought Gaddafi was gaining or losing ground, French and U.K. leaders were actively taking the lead to intervene. Obama’s problems didn’t stop there, as other Democrats joined in on the mixed messaging.

On the same day that President Obama dismissed Clapper’s testimony, former-president Bill Clinton threw another wrench into Obama’s Democratic toolbox of confusion. While Obama and Hillary Clinton were remaining reserved in their consideration of a no-fly zone (a proposal that was, sadly, mulled over for weeks, with little action occurring as a result), Bill Clinton was far from coy in separating himself from the administration’s stance. In reference to the no-fly zone, he said, “We have the planes to make an appropriate contribution to this. I wouldn’t do it if [the rebels] hadn’t asked. We should do it.”

The former president was right to call for a no-fly zone. Unfortunately, while President Obama continues his “on the job training,” real life situations require viable and swift action. Perhaps Hillary Clinton summarized the administration’s stance best when she explained what was preventing officials from more rapidly intervening to stop Gaddafi: “Absent international authorization, the United States acting alone would be stepping into a situation the consequences of which would be unforeseeable.”

What, exactly, does it mean for “consequences to be unforeseeable?” European leaders were already leaps and bounds ahead of the U.S. in their discussions about how to handle the crisis. No one was asking the U.S. to act alone. To the contrary, the administration should have been taking the lead to mobilize international partners to action. Instead, President Obama allowed the situation to fester for more than 30 days and virtually refused to take the helm. In the end, his fear over the world’s perception of a U.S.-led initiative led him to cede a viable role in the process.

President Obama’s perceived lack of interest and energy in dealing with this international crisis makes the U.S. look weak and unprepared. History shows all too well what happens what world leaders appear weak in the eyes of brutal dictators. Diplomacy – the president’s most beloved method for dealing with maniac foreign leaders – did anything but improve the situation. Gaddafi continued his assault, assuming that President Obama and international partners would do little to stop him.

Today’s military strike likely serves as a reality check for Gaddafi. That said, one cannot help but leave this situation a bit worried about the president’s leadership capabilities. From the federal budget to Libya, a lack of attention, action and clear communication strategies seem to plague the administration. The president should focus on getting these items in order should he plan to receive the American people’s blessing for a second term come next November.