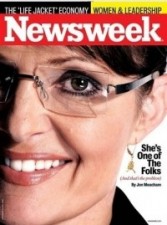 Sarah Palin is currently involved in a heated back-and-forth with Newsweek magazine (while Runner’s World ducks for cover) over their use of a sexy cover photo of her on their most recent issue. This whole thing sounded weirdly familiar to me. Newsweek magazine accused of sexist cover photo, headline calling her a problem? Sure enough, it looks like this is an annual event for Newsweek. There are a few key differences, though.

Way back in October of 2008, Newsweek took fire from Palin supporters for a cover photo that was not sexy enough. In a segment on Fox News, a Republican media consultant picked the extreme closeup apart, pointing out wrinkles, pores, and unwanted facial hair.

While Jezebel, among others, pointed out the falseness of the assertion that Obama magazine covers were retouched to make him look flawless, the title of the cover story was a dead giveaway: The Palin Problem. It doesn’t seem likely that they picked the photo for its artistic merit.

The biggest difference then, though, was that Palin herself wasn’t doing the complaining. The McCain campaign staff that she so thoroughly derides now apparently kept her from lashing out then, and wisely so. Getting worked up over a magazine cover, especially ones as relatively innocuous as these, doesn’t bespeak the toughness demanded of a leader.

Plus, Rachel Sklar has a point. When she posed for the sexy Runner’s World spread, she and the magazine had to know they were going to sell to a wider audience than just jogging enthusiasts. This doesn’t make Palin fair game, but it raises the bar for what she gets to call “sexist.”

As for Newsweek, their respective points might have been better served in each case by using less controversial cover photos, but would have arguably been seen by far fewer people. Maybe, in the future, they should stick with (real) pictures of Palin holding guns. Everyone seems to like those. 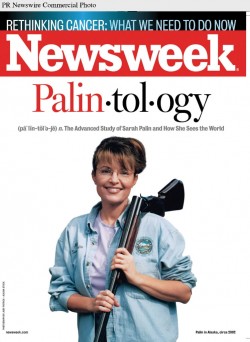