The Political Love Affair The Media Never Tires Of

The Political Love Affair The Media Never Tires Of 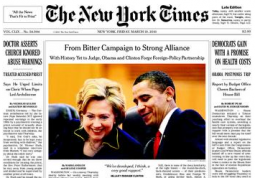 No not this one. Nor this one. Print subscribers to the New York Times will already know the answer because the accompanying picture to the article takes up 3/4 of the above-the-fold space of today’s paper. Hillary and Obama!

No word on what inspired the timing of this piece; maybe the Times got tired of reporting on the Obamas proper? Which is not to say it’s not interesting. It is! Court intrigue as only the NYT can provide it (how else would we know President Obama offered Chelsea a White House wedding?). That said, the short version appears to be that while Secretary of State Hillary Clinton is putting on a good face, President Obama is pretty tight-fisted when it comes to sharing power.

Mrs. Clinton has proved to be an eager team player, a tireless defender of the administration, ever deferential to Mr. Obama and careful to ensure that her husband, the former president, does not upstage her boss.

Mr. Obama has been solicitous of Mrs. Clinton, yielding to her at times in internal debates, even showing signs of adopting some of her more hawkish world views.

They now joke about their “frenemies” status and have made gestures toward each other’s families.

Mr. Obama has jealously guarded his prerogatives as the architect of American foreign policy, concentrating decision-making on crucial issues like Iran, Iraq and the Middle East in the White House. And Mrs. Clinton has yet to stake a claim to a core foreign-policy issue, the kind of signature role that would allow her nascent partnership with Mr. Obama to become a truly historic alliance.

Well there’s still time, I guess. Plus, apparently Obama is in the process of forgoing the cool factor so perhaps this will be included in the thawing.