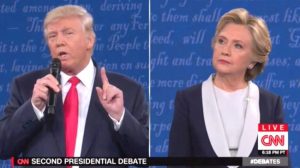 So, did you hear? Donald Trump won the second debate. It was YUGE. Rush Limbaugh told me so.

Unless he lost. Badly.

Or maybe it was basically a tie.

I have written a lot about what I perceive to be the most insidious effect (of many) that the modern fragmented media has had on our culture and politics. I even predicted/diagnosed that this phenomenon would lead to Donald Trump’s nomination and Hillary Clinton’s election.

However, I have never witnessed a political event where America was more divided about what they thought they saw than last night’s second presidential debate. This was the equivalent to the racially divergent reaction to the O.J. Simpson trial (this entire election cycle feels more and more like that entire nightmare all the time).

“Conservatives” (or whatever you call non-Democrats in the age of Trump) are absolutely certain that their false God had, like Lazarus, risen from a death, prematurely declared by the clueless/biased media elites, and finally exposed the Clintons as the corrupt liars that they are. To them, he got past the “irrelevant” stuff about him having bragged about sexual assault on tape and then crushed her on the substance of all the issues that real Americans truly care about. His pre-debate stunt with Clinton sex abuse accusers was both brilliant as well as a cathartic payback for them having largely gotten away with horrible behavior in the distant past.

To his fans, Trump is now back in the race and headed for victory! Just ask Breitbart (though, how do you make a “comeback” when you were supposedly never behind to begin with?). Hell, according to Trump pal Alex Jones, Hillary revealed herself to literally be a demon! Who smells really bad. Just like Obama. Seriously.

For those who are Democrats, the view, to say the least, was vastly different.

They are SURE they saw Hillary Clinton stay classy and brave amidst the onslaught of a sniffling crazy man who was physically stalking her while attacking with lie after lie generated by the anti-Clinton right-wing media hate machine. They perceived Trump as a pathetic man unwilling to take responsibility for his bragging about getting away with sexual assault, while lamely claiming that a very public TV interview where he knew he was wearing a microphone was somehow nothing but “locker room” bravado (and that the Republican Party’s standard for its presidential nominee is now apparently lower than the Today Show’s is for Billy Bush!).

To liberals, while they don’t love Hillary, it is complete insanity that anyone would ever even consider voting for a lunatic like Trump. They think that Republican Party under Trump has truly become the embodiment of every negative stereotype with which the liberal media has brainwashed them for over a generation. They now feel vindicated for their illogical hatred of people like Mitt Romney and John McCain because, “See, we just knew what those Republicans were REALLY like all along.”

As for me and others in the bizarro world situation of being long-time conservative Clinton critics who also realize that Trump is an unqualified liberal fraud, we saw something very different from either of those two very divergent groups.

I perceived a Donald Trump who, like a wounded animal, knows he is going down to defeat without a miracle and, fueled by rage, no longer fears any repercussions for anything he says or does. As Janis Joplin once famously sang, “Freedom’s just another word for nothing left to lose.”

The goals for Trump were, assuming there is still any rationality at play here, not victory, but rather blind vengeance and an insecure desire to have his bruised ego soothed by the self-serving cheers of the “conservative” media and their millions of lemmings/customers. He achieved both of those objectives, while also keeping the dream of “Trump TV” alive (though it will have to be a subscription model to have any real chance to succeed).

As I have said consistently and without equivocation for over a year, Trump, barring a catastrophic event, is not going to win this election. The only real question seems to be how large will the defeat be, and whether he will hand Hillary not only the White House, but also both houses of Congress, or just one.

As for Hillary herself, she once again showed how deeply flawed a candidate she really is. While steady under fire (flak more real than what she supposedly faced in Bosnia) she was unable to take advantage of numerous opportunities to humanize herself. She remained cold, calculating, scripted, overly safety conscious and mostly unlikeable (ironically, her ability to withstand Trump’s rudeness in these debates might be revealing her most appealing quality). She will be an unloved and, at best, mediocre president who, if the Republicans were not badly infected by the Trump virus, would be fairly easily beaten in four years.

A diversity of opinions is obviously necessary in a democratic republic, however we are now FAR beyond that stage of development. We are now living in separate self-segregated worlds with our own realities which we can reinforce with our own well-designed media bubble where no contrary information can penetrate to ever make us feel uncomfortable.

Forget about this ever being a truly unified country again. I don’t care if we strongly disagree about what our communal “book” means, but we ought to at least be able to somewhat come to an understanding on what the words on the pages are. Last night proved, at least in the era of Trump and Clinton, that is simply, sadly, impossible.