The Sham-Wow Obamacare Sale: With Legacy on the Line, Obama Reduced to Pitchman 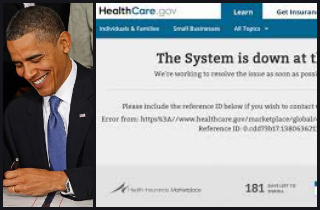 As you may have heard, President Obama opted to do a speech from the Rose Garden rather than granting a one-on-one interview or holding a press conference to provide a State of the Affordable Care Act.

Quite frankly, it was his only option.

Because if even a High School journalist was given direct access to the President, or if one member of the White House Press Corps actually did his or her job—which they certainly did not during a press conference right out of an SNL skit 12 days ago—real questions that weren’t asked would certainly be asked now, including the following:

Mr. President, why are you lying to the American people about why healthcare.gov isn’t working?

The “L” word is rarely used with politicians regardless of power or office. The assumption is that most embellish and exaggerate when trying to sell a policy or position for maximum effect. But here you have President Obama—already in serious defense mode just three weeks into the worst launch since New Coke (with all due respect to New Coke)—stating the lie, (yes, lie) that the primary reason the healthcare.gov website is a complete disaster is because too many people are trying to access the site.

No, it’s not because of the five millions lines of code that need to be written, which could take weeks, even months (the site took over 40 months to build, so let’s add years to that equation). This isn’t a glitch problem, it’s a design problem.

No, it’s not because the Administration refused to do a soft launch to work out the kinks first. That would make far too much sense.

No, it’s not because the President—the one who keeps spinning how many jobs he’s created for hardworking American folks since taking office—largely outsourced healthcare.gov to a company based in Silicon Valley North…which some refer to as Canada. A GoDaddy blog account for $9.95 works better than this, and for about $634 million less.

And no, it’s not because the President is holding anyone directly accountable. Try to imagine a very public company—say, Apple—launching an iPhone that doesn’t allowing text messaging, phone calls, access to apps or the Internet three weeks after launch. Picture what would happen if not nearly enough people were buying said product to sustain its existence on the market. Would the late Steve Jobs allow this to happen without some heads rolling? Would any executive suffering this kind of public humiliation? Would the product even survive the season?

But never mind all of that. Just how is the President lying?

Simple. Because by trying to Sham-Wow this sale…after reporter after reporter has tried (and failed) logging on in the middle of the night when traffic is low, and especially after the independent research firm Millward Brown Digital found the number of visitors to healthcare.gov has dropped by 88 percent since Day 1 of its launch, this excuse that a massive amount of demand is forcing the website to fail is, yes, an outright lie to any sane person not blinded by ideology.

And it’s not just me who is now calling the President a liar. MSNBC’s Mike Barnacle used the same word to describe the Administration as a whole Monday morning.

So this all begs the question from a media perspective: Where are all the polls on this topic that we saw hourly during the partial government shutdown? You know…those polls that place blame and allow the audience to choose sides on most of the cable news shows?

Since it appears everyone is out to lunch on this, here’s one that can be borrowed for any outlet who wants it:

Whom or what do you blame for the massive challenges around the Affordable Care Act/Obamacare thus far?

– President Obama
– Health and Human Services Secretary Kathleen Sebelius
– Canada (“Blame Canada” is a South Park classic, after all)
– All of the Above
– None of the Above

For once, Congress or President Bush (43) aren’t available for selection, but rest assured if a write-in option was available, each would predictably garner double-digit blame from the usual suspects.

As noted in the title of this column, the President’s legacy is on the line here. Twelve months from now, almost no one is going to cast a vote based on who was responsible for the partial government shutdown we just somehow endured without the whole Republic crumbling. But if the ACA/Obamacare is still performing even remotely as poorly as it is now, well, all of that speculation of a wave election in favor of the Democrats will look patently foolish.

And in the process, the President will become a true lame-duck with his signature piece of legislation either acting as a rudderless ship eating up all of his time and taxpayer resources…

If the President was as smart as he is stubborn, he’d scrap the project as it stands and rebuild from scratch.

This isn’t simply a trip-to-the-Apple-Store kind of fix. It’s a complete overhaul.

They say you can’t get a second chance to make a first impression.

Many in the media took their eye off the ball that is Obamacare during the partial shutdown.

But there is no distraction now from what should have been the lede all along.

And every day this program doesn’t work is one more piece added to putting Humpty Dumpty back together.

One thing is for certain:

Unlike the past, even the President can’t campaign his way out of this mess.

Not without a willing media on his side, anyway.