The Song Remains The Same: Obama’s Budget Fails With The Usual ‘Tax and Spend’

The Song Remains The Same: Obama’s Budget Fails With The Usual ‘Tax and Spend’ 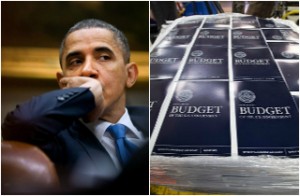 On Wednesday, President Obama unveiled his budget proposal. The budget-that-never-balances includes $1 trillion in brand new taxes, nearly as much in spending, and adds over $8 trillion to the debt over the next ten years. All the usual suspects are attacked and the usual “investments” promoted. Let’s take a look:

Attack on seniors? Check! When $700 billion was gutted from Medicare to finance Obama’s (erroneously entitled) Affordable Care Act, many assumed that would be the worst of it. Then we learned ObamaCare, for instance, provides bonuses to hospitals for spending less per senior, incentivizing decreased care. Now we learn Obama’s budget will use the chained consumer-price-index (CPI) to calculate Social Security benefits for our elderly.

While conservatives champion entitlement spending cuts, one does wonder: Why the need to constantly pick on seniors, particularly while Medicaid, in stark contrast, expands? As National Republican Congressional Committee chairman, Rep. Greg Walden (Ore.) noted, the budget is “kind of a shocking attack on seniors” and is “trying to balance the budget on the backs of seniors.”

And, while using the chained CPI is a more accurate way to measure inflation, sure, why the chained CPI for non-means based benefits and not across the board for all benefits?

Class warfare? Check! Class warfare seems to be President’s Obama constant, if nothing else. For five years, the American public has heard gripes about “the rich” yet nothing about “the job creators.” (If “fair share” has been your drinking-game trigger during Obama addresses, have your liver checked.) The fiscal cliff negotiations’ $600 billion tax increase was not enough, apparently. This budget’s incorporation of the ‘Buffet Rule’ requires households with incomes of over $1 million to pay at least 30% in taxes… because 30% is what our president determined is a “fair share.” (The Bible and Obama clearly differ on this.) Never mind the funds that will now be stolen away from the economy-boosting private sector to fill (and die a slow death in) the government coffers — ask yourself this instead: Will tax revenues even go up as a result of this? Not exactly! When Reagan slashed the top income tax rate from 70% to 28%, government revenues increased. Why? Because, as a result of the tax cut, more investments were made, more companies created, more jobs, more workers – so there was more to tax. George W. Bush did the same, cutting the top tax rate from 39.6 to 35 percent and yielded the same result. This is the paradox of economics (how, almost ironically, cutting top tax rates results in higher government revenue) that few bother to grasp.

Even the budget’s switch to the more accurate ‘chained CPI’ for measuring social security — which Obama hails as a ‘concession’ and a sign of his good faith in cutting entitlement spending (albeit apparently only on spending that involves seniors) — is likely something with which he got on board because of its double-edged sword. The chained CPI, you see, will also be used to determine tax brackets … and a chained CPI results in the American taxpayer paying more, by the tune of about $100 billion.

Pointless education programs (ahem, “investments”)? Check! Sorry, liberals, but no matter what MSNBC hosts, or Hillary “It Takes A Village” Clinton, claim, no, your child is not my responsibility, nor my financial burden, to bear. The Department of Education already has the third largest budget of any federal agency – a whopping $60 billion annually. And there are already over 40 government–funded programs providing early education and child care, including the abject failure Head Start program, which has been unable to show any positive impact or effect on the children enrolled. Yet we need another? It would seem so! Obama’s new “Pre-School For All Initiative,” providing pre-school to four-year-olds, will allegedly be offset by taxes on smokers (the group that ranks even higher than seniors and the wealthy on this administration’s bullying list). The program being off-set by taxes on cigarettes may all seem well ‘n good – until one realizes, like every government program, it will inevitably balloon past its estimated cost, ‘smoker taxes’ will no longer be able to cover it, and voila! — in comes taxpayer Joe to pick up the tab so you can drop your child off at what is essentially a day-care of the state.

Useless infrastructure spending? Check! Obama’s “Fix It First” program allocates $40 billion (funny how much we’ve crown accustomed to that word – billion) in spending aimed at repairing the nation’s bridges, roads, and highways. While I like Soviet-style central planning as much as the next girl (not really), states are most suited to handle these issues, not the federal government. And $31 billion has already been spent on such projects, via the 2009 stimulus. The budget also dedicates billions in spending for high-speed rail and the stubborn-rash-that-won’t-go-away: green-energy projects.

Sigh. One wishes, after five years of mostly failed policies, President Obama would drop the ‘tax and spend’ and offer something new. But, no, the song remains the same.