Reading a recent Washington Post headline, you’d think they had quite the story on their hands: “Rubio’s summer of ’90: An arrest, then newfound purpose.” Indeed, seemingly about half the Post tweeted out this exciting new scoop about how Marco Rubio had once been arrested, a never-before-reported fact. 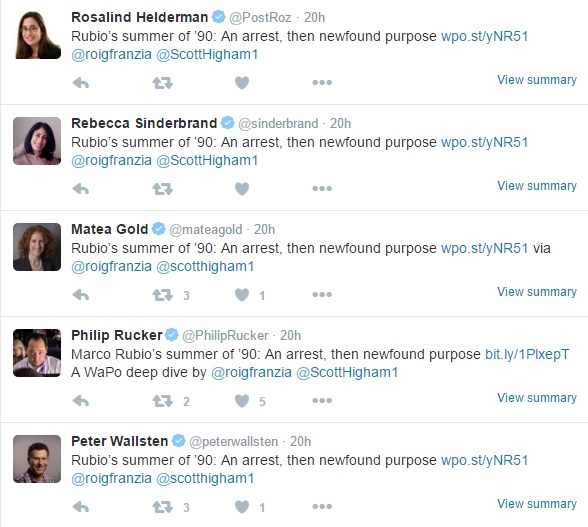 Unfortunately, the story itself is unbelievably lame. You see, when Rubio was 18 years old, he and some friends were hanging out in a park after it had closed…

…and that’s it. Seriously, that’s the entire story.

According to the Miami Police Department incident report, a police officer arrived at the park at 9:47 pm, 10 minutes after being dispatched. The report notes that Rubio and two other teenagers were inside the park after hours. In a recent interview, Angel Barrios — one of the men arrested with Rubio — said they were sitting in a car when they were approached by an officer.

“We were there just hanging out,” said Barrios…

Horror of horrors! Next you’ll tell me he jaywalks, and that he once left the toilet seat up.

By the way, although the headline and the above paragraphs refer to an “arrest,” the article makes it clear later that the boys weren’t even “arrested” by any common meaning of the word.

Record searches turned up no evidence that mug shots were taken. “I don’t think we got handcuffed and taken to jail,” Barrios said.

Instead, Barrios said, the teens were given “a piece of paper,” a “PTA,” short for a promise to appear in court. But Barrios said, “I don’t think we even ended up going to court.”

Court records state the charges against all three teens were dismissed in July, two months after their arrest. Law enforcement officials say it was common in those days for minor offenses at the park to be dismissed.

I can only assume that even the reporters realized how lame their scoop is, because they also resort to guilt-by-association to sex up their story. The park, we’re told, was “crime-plagued” and “a haven for drug dealers, prostitutes and gang members.” We’re also told that Rubio’s brother-in-law was arrested the previous year for drug trafficking, an incident with no bearing on the story. Of course, the Post never says that Rubio was involved in any other crimes… they just let their readers draw that conclusion themselves.

Heads up to The Washington Post: most poor Latino and African-American men live and hang out in areas with lots of crime. Many have in-laws who were arrested. But I suspect that if, say, The New York Post slyly implied that Barack Obama was once a gangbanging pimp based on his father’s questionable relatives and the neighborhoods he frequented in Chicago, you’d hear accusations from WaPo of elitism, innuendo, fear-mongering, and yes, racism.

Possibly the most amusing part of the article was the official statement from the Rubio campaign, expressing disbelief that the story was even being pursued: “When he was 18 years old, he violated a municipal code for drinking beer in a park after hours. He was never taken into custody, never hired a lawyer and never appeared in court. Why The Washington Post thinks that is a story is beyond me.”

Ironically, Rubio’s response is more damning then the actual Post reporting, in that it throws drinking into the mix. But last I checked, our current president admitted to using cocaine. The one before that was an alcoholic who was arrested for drunk-driving. The Democratic frontrunner is currently under investigation by the FBI. Rubio’s youthful dalliances doesn’t even scratch the surface of what voters consider beyond the pale.

If I were Rubio, I’d be pretty pleased. First, this gives him a chance to bash the media about a legitimate grievance, which always resonates well with the Republican base. Ted Cruz and Donald Trump did this to great effect in the most recent debate, and those were for actually damaging issues.

Second, this Washington Post scoop is just the latest in a long strong of really, really weak attacks on Rubio, including:

So if I were Rubio, I’d be delighted that after four plus years of reporters, Democrats, and fellow Republicans alike digging into his background this is the best they can dredge up.