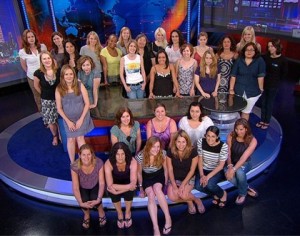 A couple of weeks ago, the Gawker-owned women’s interest and news blog Jezebel posted an article entitled “The Daily Show’s Woman Problem” in which they quoted former female employees of the venerable satire program accusing the show of being a “boy’s club” and Jon Stewart of ostensibly being a sexist who runs the office with “joyless rage.” The accusations infuriated many including, apparently, the Daily Show’s current female employees. The women just published an open letter in which they set the record straight about the show (and man) for whom they work.

The letter is actually not the first time that the Daily Show has responded to the Jezebel piece. Last week, Stewart included Jezebel thinking he was a “sexist prick” in a list of grievances during a piece about Fox & Friends. However, the letter is a whole lot more direct than that off-handed quip. It’s also sharp, to the point, and just a little bit funny (it ends, like all the best rants on the show itself, with tongue planted firmly in cheek as the woman thank the male writers who “actually” wrote the statement).

Recently, certain media outlets have attempted to tell us what it’s like to be a woman at The Daily Show with Jon Stewart. We must admit it is entertaining to be the subjects of such a vivid and dramatic narrative. However, while rampant sexism at a well-respected show makes for a great story, we want to make something very clear: the place you may have read about is not our office.

The Daily Show isn’t a place where women quietly suffer on the sidelines as barely tolerated tokens. On the contrary: just like the men here, we’re indispensable. We generate a significant portion of the show’s creative content and the fact is, it wouldn’t be the show that you love without us.
So, who are the women of The Daily Show?

If you think the only women who help create this show are a couple of female writers and correspondents, you’re dismissing the vast majority of us. Actually, we make up 40% of the staff, and we’re not all shoved into the party-planning department (although we do run that, and we throw some kick-ass parties). We are co-executive producers, supervising producers, senior producers, segment producers, coordinating field producers, associate producers, editors, writers, correspondents, talent coordinators, production coordinators, researchers, makeup artists, the entire accounting and audience departments, production assistants, crew members, and much more. We were each hired because of our creative ability, our intelligence, and above all, our ability to work our asses off to make a great show.”

The open letter goes on to describe what it’s like to work at the program as well as defend the character of Stewart who they describe as “generous, humble, genuine, compassionate, fair, supportive, exacting, stubborn, goofy, hands-on, driven, occasionally infuriating, ethical, down-to-earth and–a lot of people don’t know this–surprisingly funny.” It concludes with all of their signatures accompanied by the amount of time they’ve worked there, from those who’ve been on staff since the (arguably actually sexist) Craig Kilborn days all the way to Olivia Munn who joined the staff one month ago.

Whether or not the letter will completely erase the image that the Jezebel post created of The Daily Show office existing like some Sterling Cooper-esque throwback remains to be seen. However it’s pretty safe to assume that it will be more than enough to assuage the fears of the many Daily Show faithful (who, honestly, probably didn’t care that much about the post to begin with).